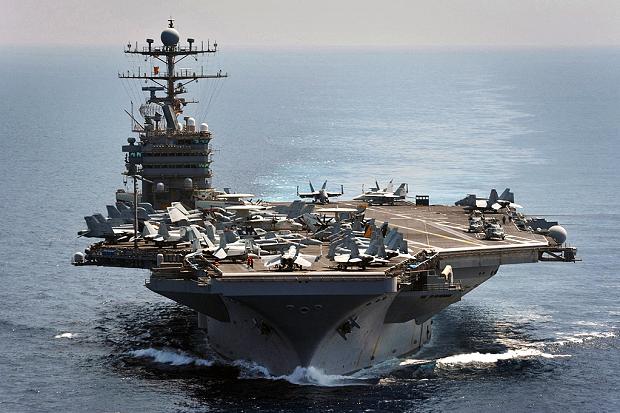 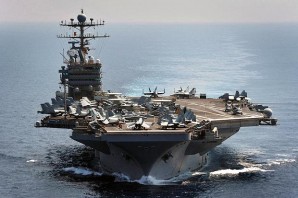 US air craft carrier in the Gulf.

Often times the enemy will reveal his intentions if you listen closely enough – such was the case with Iran over the weekend when a top leader of the Iranian Navy revealed for the first time that nation’s strategy to specifically target U.S. aircraft carriers in the Gulf should it be attacked.
Ali Fadavi, leader of the Islamic Revolutionary Guards Corp (IRGC) Navy Commander Rear Admiral  on Sunday affirmed the following:
“The United States is afraid of attacking Iran since it knows that its aircraft carrier with thousands of sailors and crews will easily sink in the Persian Gulf in case it dares to launch a military attack against Iran.”

“The Americans can sense by all means how their warships will be sunk with 5,000 crews and forces in combat against Iran and how they should find its hulk in the depths of the sea,” Fadavi said, explaining why Washington’s war rhetoric against Iran is nothing but empty boastful words.

He said since “the very first day that the US warships entered the Persian Gulf, the IRGC Navy has formed and evolved all its capabilities, training, structures, organizations and weapons on the basis of Washington’s threats”, and added that the IRGC vessels in the region are monitoring the “slightest moves” made by the Americans.

Fadavi said the Americans might be able to hide themselves in their bases in certain Muslim countries of the region if they are faced with Iran’s crushing response, “but they cannot hide themselves in the sea since the entire Middle-East region, the western Europe, the Persian Gulf, the Sea of Oman and the Strait of Hormuz are monitored by us and there is no place for them to hide” (source: IRGC Navy Commander: US Can Well Imagine How Its Warships Sink if It Attacks Iran http://english.farsnews.com/newstext.aspx?nn=13921120001529).

A Pentagon official we contacted over the weekend declined comment in this matter.