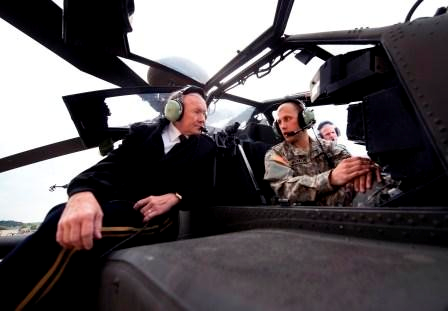 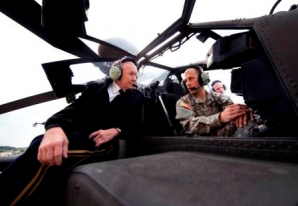 In 2012 we reported that a high ranking Iranian army commander indicated that Iran has spent lots of time and energy on pinpointing the “weak points” of U.S. Apache combat helicopters.

“They (Americans) know well that their choppers are vulnerable and for that reason they have protected some sensitive parts and some layers of these choppers, but this is not true about all the body of these choppers and we, too, have focused on their weak points,” Head of the Organization of Research and Self-Sufficiency Jihad of the Iranian Army Ground Force General Seyed Massoud Zawarehei (see article: Commander: Iran Well Aware of Soft Points of US Apache Choppers http://english.farsnews.com/newstext.php?nn=9106243532 ).

The Boeing AH-64 Apache is a four-blade, twin-engine attack helicopter with a tailwheel-type landing gear arrangement, and a tandem cockpit for a two-man crew. The Apache was developed as Model 77 by Hughes Helicopters for the United States Army’s Advanced Attack Helicopter program to replace the AH-1 Cobra, and was first flown on 30 September 1975. The AH-64 was introduced to US Army service in April 1986.

The AH-64 Apache features a nose-mounted sensor suite for target acquisition and night vision systems. It is armed with a 30-millimeter (1.2 in) M230 Chain Gun.

It has four hardpoints mounted on stub-wing pylons, typically carrying a mix of AGM-114 Hellfire missiles and Hydra 70 rocket pods.

“All in all, choppers are surely vulnerable and cannot be coated by a layer of steel,” the commander added.

Unconfirmed reports suggest that the Iranian military is studying Apache helicopter “shoot down” videos from Iraq and Afghanistan in an attempt to study their weakness.

“Enemies should not imagine that if their Apache choppers have shown a mighty and desirable performance in Iraq and Afghanistan, they can show the same might and power in a possible aggression against Iran. We will certainly put an end to the power of their Apaches through our measures,” said Colonel Nasser Arab-Beigi, the head of IRGC’s Self-Sufficiency Jihad Organization (see article: Iran boasts of new Apache-killer weapon as tensions rise with U.S. http://en.rian.ru/mlitary_news/20100203/157756768.html ).

We tried unsuccessfully to relay this information to the Pentagon in 2012, 2013 and most recently in 2014  – apparently officials there are not interested in it?

So we communicated our concerns directly with Apache helicopter pilots at Ft. Riley, part of the 21st Calvary Brigade who were very appreciative of that effort – mainly because their lives may depend on it someday.