The UN has introduced a global education agenda, known as Education 2030. The goals of the agenda aim to stimulate action over the next fifteen years in the Five Ps of critical importance: People, Planet, Prosperity, Peace and Partnership. The framework for action outlines how to translate into practice the commitments made at the country, regional and global levels and provides implementation guidance.

Iranian President Hassan Rouhani and his cabinet have adopted this UN-devised plan and have received strong criticism from the Supreme Leader as a result.

“Iran is not a place for infiltration of the flawed, devastating and corrupt Western lifestyle,” said Khamenei at a gathering of Iranian teachers in Tehran on Sunday. “That document and similar ones are not things that Iran would give in to.”

Signing that document Education 2030 and its silent implementation is certainly not allowed and this has been announced to the organizations in charge, Khamenei added. He then blamed the Supreme Council of the Cultural Revolution for being careless in handling the case so that the Leader himself now has to get involved and oppose it.

“A so-called international organization under the influence of big powers has no right to make decisions for different nations with various histories, cultures, and civilizations,” said Khamenei.

He then went on to slam the adoption of the agenda as wrong in nature, noting that Iran has its own grand documents in the field of education. “This is the Islamic Republic of Iran, and in this country, Islam and the Quran are the base,” he added as part of his remarks.

This move shows the splintering that is occurring in the factions within the regime. In the past, Rouhani wouldn’t have adopted such a measure without direct approval from the Supreme Leader and Khamenei would have never had to publicly oppose such a measure. It is this discord that seems to be telling the international community that Iran’s regime is not as cohesive in its messages as it has been in the past.

The lack of a true successor has also weakened Khamenei’s position, as he is seen as a leader that is on his way out. Without a successor, there could be a significant power vacuum within Iran upon his passing. This is just one example of how individuals within the regime are attempting to consolidate their own power and the instability of the regime as a whole. 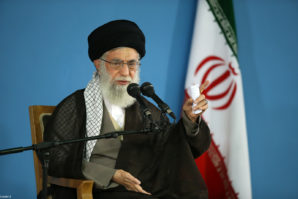