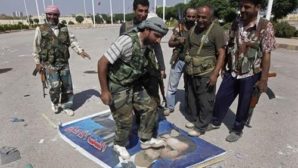 The recent advances made by Syrian rebels in various fronts across the country have raised major concerns for the ayatollahs in Iran regarding the imminent downfall of Bashar Assad. Excerpts of this report are as follows:

“The status quo is very dangerous. If the rebels continue gaining ground we will not be able to prevent their advances. We may wake up one night and see everything gone. We must do something now or else tomorrow will be too late.

“A number of senior Iran officials visited Syria to express their support for Assad and break this climate of fear and hopelessness, and deny any rumors about Tehran selling out on Bashar Assad to make a deal on the nuclear dossier with the West.

“30,000 Revolutionary Guards and Bassij forces are necessary to prevent the defeat of Bashar Assad’s forces, or else Damascus will fall. We cannot count on the Syrian army. They have lost their spirit and cannot confront the enemy. On the contrary, the rebels have set aside their differences and become stronger. Saudi Arabia, Qatar and Turkey are placing supplies at their disposal.

“We must be concerned about an over-night downfall of the regime. Syrian soldiers say they are tired. They can longer confront the rebels. When these forces feel the pressure they flee the battlefront. The situation is very grim. Everyone knows now that Assad forces and those supporting him are done with, and there will be no new forces.

“It may reach a point that we wake up one morning to see the rebels in Damascus. If they fire just a few mortar rounds into the capital it will be all over. All the streets of Damascus are empty.”