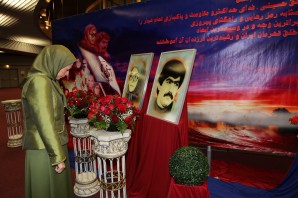 Maryam Rajavi tribute honor to those fallen for the cause of freedom in Iran. 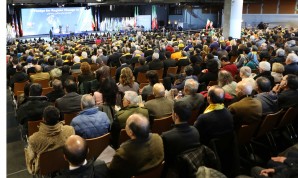 On the eve of the 35th anniversary of the anti-monarchial revolution, representatives of over 300 Iranian associations from all over the world held their first universal convention in Paris. 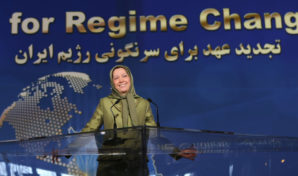 Paris, France 8 feb 2014 Maryam Rajavi: to establish freedom and democracy in Iran, we highlight the demarcation with the regime in its entirety and we also stress solidarity with all those true defenders of overthrowing the regime

Paris, France 8 feb 2014 The Convention of Iranian Diaspora – Representatives of the associations and the societies participating in the convention referred to the 35-year miserable record of the rule of the mullahs in Iran in their speeches, as well as in the declaration of the convention and declared that the sole avenue to establish democracy and freedom in Iran is through the downfall of the mullahs’ regime in its entirety and the establishment of a democratic republic based on the separation of the church and the state.

Paris, France 8 feb 2014 Maryam Rajavi was the keynote speaker and delivered a speech at Convention of Iranian Diaspora Unites Over 300 Iranian Associations

Paris, France 8 feb 2014- The Convention of Iranian Diaspora encompassed a wide range of intellectuals, political and human rights activists, women’s rights activists, scientists, experts, entrepreneurs of many professions, and students, as well as ethnic and religious minorities from Iran. Mrs. Maryam Rajavi, President-elect of the Iranian Resistance, and a number of prominent politicians from the United States and Europe offered their speeches to this convention.

Over 300 associations and societies from across the globe joined together in the Iranian Diaspora.  Intellectuals, political and human rights activists, women’s rights activists, noted authorities, entrepreneurs, professionals, students, and ethnic and religious minorities combined their passion, experience and intellect.  The gathering of such a wide spectrum of prominent leaders all focused on the same goal spoke volumes for the necessity and urgency of the convention.  The 40 associations from the United States as well as 14 other countries combined professional, vocational, regional, women and youth groups.

Mrs. Maryam Rajavi, the Charismatic leader of Iranian opposition was the keynote speaker and delivered a resounding speech which was treated with standing ovation from several thousand delegates attending the convention.

The convention was held on the eve of the 35th anniversary of the anti-monarchial revolution.  The devastation and corruption of the infamous regime of Velayat-e faqih was so extensive that intellectuals fled the country.  Those who were not fortunate enough to escape were deprived of their fundamental rights, tortured or executed.  Women, youth, professionals and anyone brave enough to voice a dissenting opinion were violently silenced.

According to the convention participants, the promises of moderation have proved to be nothing more than a mirage.  Hassan Rouhani’s cadre of officials has been incapable or unwilling to initiate any improvements.  Human rights in Iran have remained nonexistent.  More than two-thirds of the 700 executions during the last year occurred during Rouhani’s presidency.  Freedom of the press, freedom of expression, freedom of association, nor freedom of information has improved; freedom has been non-existent.  Women have continued to be suppressed and denied even basic rights.  The voices of the youth have been muffled.  Access to the Internet has been restricted.  Policies which prevented freedom and access to information reek of dictatorship more than moderation.

Another significant issue discussed at the convention was Tehran’s meddling in Syria, Iraq and other countries.  Tehran’s nuclear weapons program created a time sensitive need for a comprehensive agreement.  The future of the world communities’ relationship with Iran reached international center stage.  According to the Geneva agreement, Iran had to reach a solution on Tehran in 2014.

The passage of the Declaration of Convention of Iranian for Democracy supported the National Council of Resistance of Iran, the democratic opposition and the democratic alternative.  President-elect of the NCRI, Mrs. Maryam Rajavi’s 10-point plan for a democratic future in Iran received the solid endorsement of the convention.

Endorsement of Rajavi’s 10-point plan solidified the goal of the associations in the Iranian Diaspora.  The convention accomplished its mission to turn the future of Iran with the establishment of democracy, restoration of human rights and the formation of a secular government in Iran.