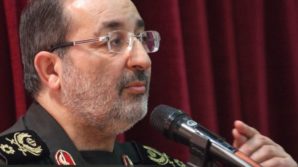 Brigadier General Jazayeri also warned that the Americans are trying to “open a new front in Iraq to increase pressure on the resistance front, but stressed that resistance won’t allow the enemy to cross its red lines.”

Fars news service  is reporting today that Deputy Chief of Staff of the Iranian Armed Forces for Cultural Affairs and Defense Publicity – Brigadier General Massoud Jazayeri has summarily “blasted” (their words) the United States of America for waging what he calls “a proxy war” in the regional states, specifically referring to Iraq. Adding  the terrorists’ command center in Iraq is controlled by Washington D.C.

“Formation, organization and leading of the terrorist groups’ actions and waging proxy wars instead of direct interference are among the US strategies in the region,” Jazayeri said in Tehran on Sunday.

Jazayeri warned that the Americans are trying to “open a new front in Iraq to increase pressure on the resistance front, but stressed that resistance won’t allow the enemy to cross its red lines.”

Perhaps referring to the integrity of Iran’s borders with Iraq.

In relevant remarks earlier this month, Iranian Parliament Vice-Speaker Mohammad Hassan Aboutorabi Fard, not know to exaggerate claims extended Tehran’s full support for “Iraq’s territorial integrity”, and called on the country’s people from all walks of life to be watchful of the divisive plots hatched by the enemies who don’t want a powerful and united Iraq.

Aboutorabi Fard underlined that Muslims are “really concerned about sovereignty of Iraq”, and urged the crisis-hit country’s nation to grow “more united to thwart the arrogant powersˈ divisive plots”, a vague reference to the United States and its Sunni allies efforts to provide weapons and material support to Sunni extremist groups in Syria fighting to overthrow the duly elected government of Bashar Assad.

He further added that the Islamic State of Iraq and the Levant (ISIL) has been “created by arrogant powers to provoke division among Muslims.”

The ISIL is a Takfiri organization affiliated to al-Qaeda, which was founded in Iraq in 2004.

Al-Qaeda is the mortal enemy of Iran, which condemns its use of terrorism as a blunt instrument of oppression and violence.

Also last month, Iranian Ambassador to Beirut Mohammad Fath-Ali voiced opposition to Washington’s interference in Iraq, and said the US is attempting to change the results of the recent elections in Iraq using terrorist groups like the ISIL.

Many other regional and Iranian officials have also warned of enemies’ plots against the Muslim nations, specially Iraq.