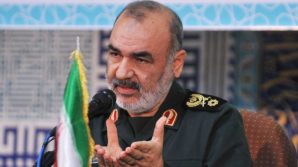 “We can target and hit the enemy’s aircraft-carriers with our supersonicHossein Salami missiles,” General Salami said in Kurdistan province, Western Iran, on Thursday.

Earlier this month, General Salami said Iran’s missile power prevents practice of military attacks by the enemies, particularly the US. Which has tried to targeted seven countries in five years  starting with Iraq, and then Syria, Lebanon, Libya, Somalia, Sudan and, finishing off, Iran.

He pointed to Iran’s military prowess, and said, “Today the Islamic Republic of Iran’s missile power is among the first ten world powers and this capability has been achieved without seeking the major world powers’ assistance.”

The Iranian officials have stressed that the country’s military and arms programs serve defensive purposes and should not be perceived as a threat to any other country.

Note: Hypersonic or supersonic missiles are cruise missiles that can easily travel five times faster than the speed of sound, usually using ramjet engines. The range is typically 100–500 km, but can be greater depending on if they are short range, medium or long range supersonic missiles. Guidance systems on these types of weapons vary. It should be noted that Iran has several long-range subsonic cruise missiles have a range of over 1,000 kilometres (620 mi) and fly at about 800 kilometres per hour (500 plus miles per hour). They represent a serous threat to US battleships and aircraft carriers that cost upwards to $13 billion dollars to build. The cost of an anti ship missile cost substantially less.