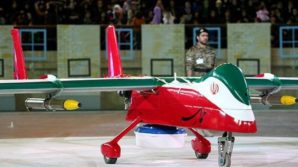 “We use drones to monitor the Eastern borders and we have reconnaissance flying objects which are used wherever necessary,” General Ali Beiranvand added. Pictured here: A domestically produced Iranian stealth  combat drone.

The Commander of the Iranian Police’s Air Force Brigadier General Mohammad Ali Beiranvand said the country’s border guards “are using different kinds of aircraft, including Unmanned Aerial Vehicles, to carry out their missions.”

“To enhance Iran’s border security, a major part of our energy is directed at the country’s borders in the East and the sensitivity which exists in this regard has made us use different types of aircraft to reach the borders in the least possible time (whenever needed),” Beiranvand told FNA on the sidelines of the 20th international press and news agencies exhibition in Tehran on Monday.

“We use drones to monitor the Eastern borders and we have reconnaissance flying objects which are used wherever necessary,” he added.

Beiranvand said that the Law Enforcement Police has a sufficient number of drones to carry out its missions and uses them whenever necessary.”