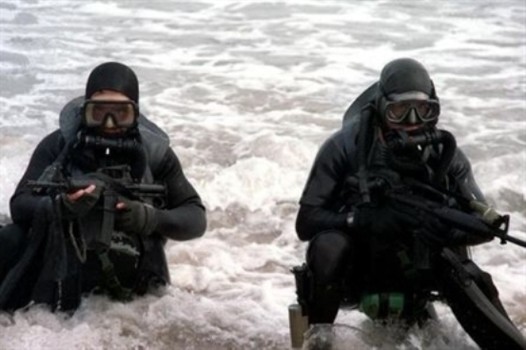 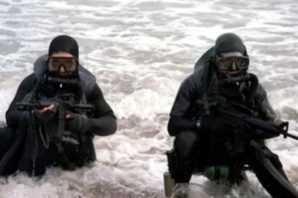 Last year we reported on a matter where the Islamic Revolution Guards Corps (IRGC) naval forces secretly recorded an almost one-hour-long video of a US aircraft carrier operating in the Persian Gulf from a very close distance. This was confirmed by a senior IRGC commander at the time.

The footage was recorded at less than a distance of 500 meters which is close enough to launch an surprise attack!

This is the first time that Iranian forces have tracked, photographed and recorded video of a US aircraft carrier this closely.

The video footage could have been attained by Iranian “frogmen” operating in a small submersible who were able to get close enough to the aircraft carrier to remain undetected. Iranian frogmen or naval commandos are considered an elite force, who are highly trained and capable of operating in the water for days with the right equipment. They are capable of deploying from midget subs and submarines…

In 1982 the Iranian military shocked the world and surprised Saddam Hussein military forces by launching over 2000 frogmen, attacking the Iraqi troops from the sea and completely cutting off Iraq’s access to the Persian gulf.

Iranian officials refused comment by email on how exactly they attained the footage or how they could have gotten so close to a US Air craft carrier in the first place.

“Forces of the IRGC’s second naval zone have recoded a secret 50-minute video of a US aircraft carrier from 500-meter distance,” Commander of the IRGC’s Second Naval Zone Ali Razmjou said, addressing a provincial meeting in Iran‘s Southern port city of Bushehr, according to the Fars News report. Pentagon officials I emailed refused comment on the FAS news report, saying, “we have no comment on this time.” The Iranian commander said the move “displays just a small part of the IRGC forces’ power and success in the Persian Gulf”, adding that given their military capabilities and preparedness, the Iranian Armed Forces does not fear the US threats.

NEVER SO CLOSE BEFORE

In December 2011, Iran’s Navy Commander Admiral Habibollah Sayyari said that an Iranian vessel and a surveillance plane recorded video of a US aircraft carrier during the Navy drills near the Strait of Hormuz in the Persian Gulf (See article: Iranian Troops Track, Record Video of US Aircraft Carrierhttp://theintelhub.com/2011/12/30/iranian-troops-track-record-video-of-us-aircraft-carrier/ ).

In May 2010, Iran’s air-defense units shooed away a US military reconnaissance plane which was seeking to approach the Iranian Army’s wargame zone in the Strait of Hormuz and Northern Indian Ocean.

“Today, Americans admit and acknowledge that the Persian Gulf is under the tight control of the IRGC Navy,” Admiral Fadavi said.

In April, Commander of the IRGC Navy Rear Admiral Ali Fadavi had stressed his forces’ domination and control over the US Navy ships in the Persian Gulf, and said that the American naval forces “need IRGC’s permission for any move in the regional waters.”

“This doesn’t mean inspection (of their ships), but controlling (them). That is to say, they should receive our permission and account to us for any move they want to make,” he explained. “The alien vessels which enter the Persian Gulf via the Strait of Hormuz always provide the needed answers and information to the Islamic Revolution Guards Corps (IRGC) units,” Lieutenant Commander of the IRGC Navy Alireza Tangsiri said at the time.

US HAS THREE CARRIER BATTLE GROUPS NEAR IRAN

Each time the Iranian Navy  was closely “shadowing” the US aircraft carriers in a deadly “cat and mouse” game (see article:“Strait of Hormuz: US aircraft carrier shadowed by Iran in Gulf”http://www.politico.com/news/stories/0212/72878.html#ixzz1vK3Vi7pC

It must be understood that each time the US provokes Iran the probability of war breaking out dramatically increases (see article: “Heightened tensions as Iranian fighter jets and patrol boats shadow USS Abraham Lincoln while it sails down Strait of Hormuz” http://www.dailymail.co.uk/news/article-2101242/Iranian-patrol-boats-shadow-USS-Lincoln-sails-Strait-Hormuz.html

Some suspect the US wants the Iranians to attack so it can justify an all out war against the country of over 70 million people.

The Iranians have been careful not play that game however (see: Commander: Iran will not initiate any warhttp://www.examiner.com/article/commander-iran-will-not-initiate-any-war?no_cache=1337435563

“A US led attack against Iran would most certainly include round the clock bombing on both civilian and military targets, much like what happened in Libya, where the US didn’t discriminate against targets in its push to crush the Libyan military and devastate the civilian infrastructure, including bombing a civilian water supply network which brought water to 70% of Libya’s population”, according to one Russian military commander speaking on the condition of anonymity.

The list of war crimes perpetrated by the US was so extensive in that case of Libya that we can’t list them all in this particular article.

For those interested in actually seeing the “criminal indictment” reference Pravda.ru article: “Will the ICC Act? Indictment against NATO” http://english.pravda.ru/opinion/columnists/16-11-2011/119646-indictment_second-0/

RUSSIAN GENERAL WARNS US NOT TO PROVOKE AN ATTACK

Russia has stood opposed to US military intervention against Iran. (see video: RUSSIA WARNS THE US NOT TO ATTACK IRAN OR IT WILL TRIGGER WW3 (1/4/2012) http://www.youtube.com/watch?v=IxnRQFZRHpA

This latest incident of Iran being able to covertly get so close to a US Air craft carrier as to secretly videotape it at less than 500 meters has us very concerned, because it demonstrates Iran ability to get close and attack it – should it decide to do it.

IRAN HAS THOUSANDS OF ELITE FROGMEN AND SCUBA DIVERS

Iran has thousands of specially trained frogmen who are noted already for their legendary prowess and skill in all facets of underwater warfare, most notably in defusing underwater mines (see: article: Iran scuba divers clear marine mines http://en.humanrights-iran.ir/news-18661.aspx ).

It’s scary to think Iranian naval commandos, frogmen and scuba divers in specially designed crafts or submersibles can get so close to US aircraft carriers…

In a worst case scenario a sinking of a US air craft carrier could lead to the death of over 5000 American lives, which is the number of personnel assigned to one…

This was all brought home recently when a top level Iranian naval commander revealed that Iran was going to target US air craft carrier is attacked (see report: Iran reveals strategy to target U.S. air craft carriers in the Gulf if attackedhttps://groundreport.com/iran-reveals-strategy-to-target-u-s-air-craft-carriers-in-the-gulf-if-attacked/).