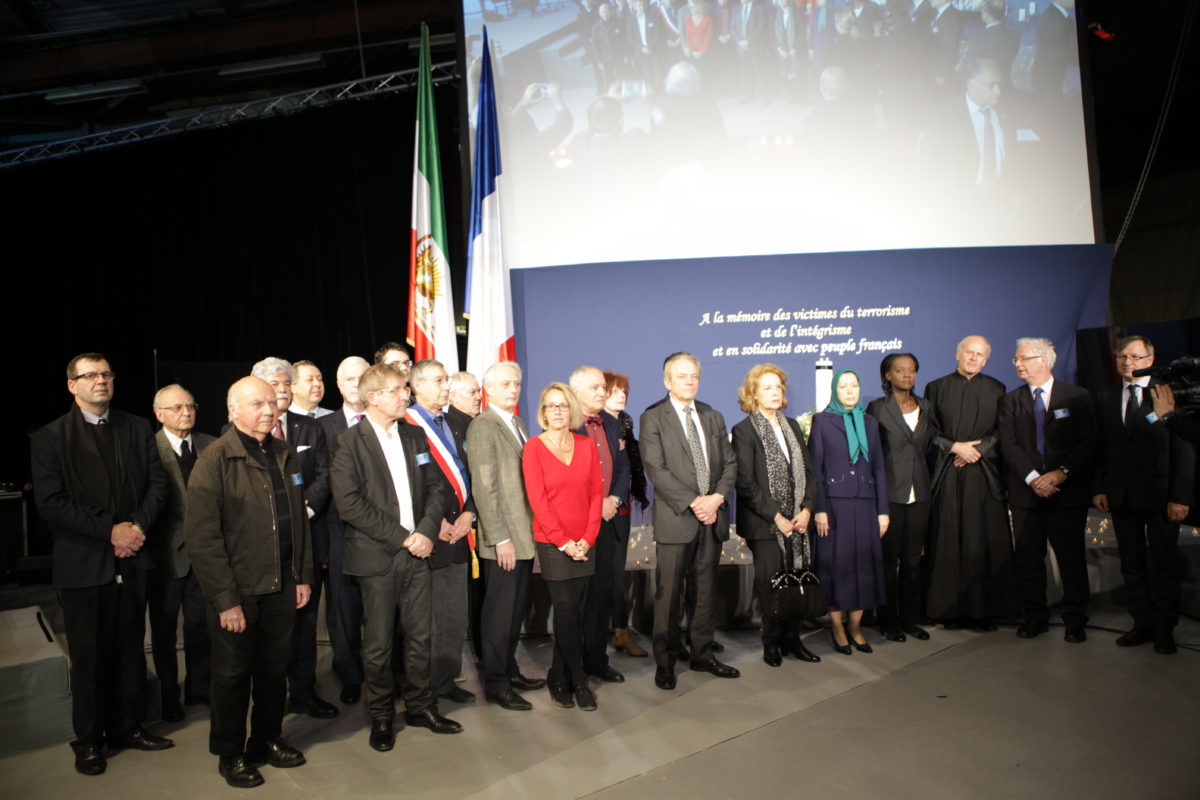 In her remarks, Rajavi enumerated a number of hideous acts of Islamic fundamentalists in recent times and said “Neither the abduction of school girls in Nigeria, nor the murder of children in Pakistan, nor the everyday hanging of prisoners, nor splashing acid on the eyes and faces of women in Iran, nor beheading western nationals, nor the sectarian killing of Sunnis in Iraq and nor the massacres in Paris have anything to do with Islam.”

Regarding attack on journalist and writes, the President of the National Council of Resistance of Iran called it “a barbarity that Khomeini first laid the basis for by his fatwa against British writer Salman Rushdie.”

Rajavi was the keynote speaker at a major conference on Sunday afternoon in Pontoise, northern Paris.

Bishop Jacques Gaillot from France, and Dr. Taissir Al-Tamimi, former Chief Justice of Palestine were the two prominent religious figures at the event titled “In 2015, all for tolerance and democracy against religious extremism.”

Earlier on Sunday central Paris was the scene of a huge rally against the terror attack on the French Weekly, Chalie Hebdo.

More than a million and up to three million Paris residents took part in the rally. Dozens of heads of states and leaders from all over the world converged in Paris to take part in the demonstration.

In her remarks Rajavi underscored the solidarity of the Iranian people with the great demonstration of people of France. On behalf of the Iranian Resistance that 120,000 of its members have lost their lives in the fight against religious fascism, she expressed solidarity with the families of the victims.

The opposition leader who advocates a tolerant and democratic Islam elaborated  on the roots of Islamic fundamentalism in recent times and said: “  “Indeed, the existence of the rule of terror, barbarism and fundamentalism in Tehran is the driving force behind all extremist forces who invoke the name of Islam. From Iraq and Syria to Yemen, and from Afghanistan to France, the political and ideological backbone of extremism under the banner of Islam is the Iranian regime.”

Rajavi called the international crisis caused by the rise of ISIS and the fanaticism under the banner of Islam a product of the Iranian regime and the policy of appeasement with this regime and added: “Mullahs of Iran and their lobbies are trying to take advantage of the coalition formed against ISIS to get their regime out of its crisis although the Iranian regime is itself the biggest source of instability in the region and its eviction is indispensable to stability, especially in Iraq and Syria.”

She stipulated that the regime of velayat-e faqih ruling in Iran is the epicenter, inspirer, and the bankroller and arms provider to extremism whether under the banner of Shiite or Sunni Islam. She thus called for support for a unified front against Islamic fundamentalism; specifically against the regime of velayat-e faqih in Iran. She accentuated that the intellectual, cultural and root solution to fundamentalism is the democratic and tolerant Islam that in Iran is represented by the People’s Mojahedin Organization of Iran (PMOI/MEK).