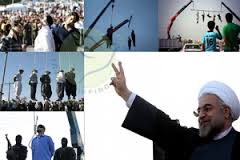 Following major rallies in cities across the country’s ethnic Azeri region, repressive forces in Iran have been ramping up measures to impose a climate of fear and quell any possible uprising flames. Reports are flooding of atrocious measures carried out by security agents and the police, while the ayatollahs’ president Hassan Rouhani is invited by some European governments like France and Italy to visit their countries for economic interests.

The situation inside Iran is so intense and the society boiling that an insult recently mentioned in state TV against Iran’s ethnic Azeri community sparked rallied in dozens of cities in northwest Iran and stretched to the capital, Tehran and other major cities across the country.

The true face of Rouhani behind his smiles to the international community can be seen in the horrific cases of crackdown reported daily from inside Iran. To mention a few one can refer to the following:

Security agents on Tuesday, November 10th murdered a 17-year-old youth by the name of Ali Jalali in the city of Ahwaz, reports from inside Iran indicate. Regime agents raided a market in this city and opened fire on innocent people, murdering Jalali and wounding many others. Jalali was working at a local bakery when hit by a bullet. After this hideous crime Ahvaz residents expressed their outrage by attacking police station #30 of this city, and the status quo is reported to remain very tense.

Hossein Ashtari, the regime’s police chief came to the scene and once again underscored the fact that police officers across the country will take action against any individuals not abiding by the ayatollah-fabricated strict clothing regulations. Such remarks are used as threats to impose pressure on the Iranian people, especially women, even when going on with their ordinary lives.

Those inside Iran’s dungeons and political prisoners are not in mercy of the regime’s crackdown wrath, either. Many, such as Kurdish political prisoner Ms. Zeinab Jalalian, are inhumanely being deprived of medical care. This particular prisoner is on the verge of going blind and is in her eighth year in prison.

Despite all this, courageous youths and college students in Iran’s Azerbaijan regions have called for protest rallies against Rouhani and the entire regime. Various gatherings are scheduled for Thursday and Friday in numerous cities and towns, and even soccer matches to express their abhorrence of the ayatollahs’ regime.

Further reports also indicate youths in the city of Urumieh used the opportunity after a volleyball match and poured into the streets, clashing with the regime’s special anti-riot forces.

Such scenes of bravery prove one simple fact. The Iranian people don’t want this regime, are rising to every occasion and using any opportunity to protest and raise their demands. What the international community continues to fail to understand is that Rouhani and this regime do not represent the Iranian people. And for those seeking to strike into this country’s wealth by signing lucrative deals with Tehran, they too should realize that the days of this regime are counting, and any such investment is simply naïve.