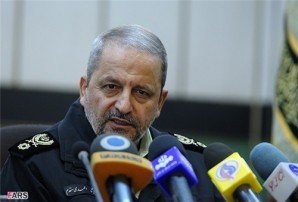 Iran’s Police Chief  Brigadier General Esmayeel Ahmadi Moqaddam underlined preparedness of the country’s military, security and intelligence forces to thwart any destabilizing threat to Iran’s borders, posed by US backed and supported Sunni terrorist organizations ISIS/ISIL  groups, particularly in the West.
The Islamic State of Iraq and the Levant (alternatively translated as Islamic State of Iraq and Syria and Islamic State of Iraq and al-Sham) (Arabic: الدولة الاسلامية في العراق والشام‎ al-Dawlah al-Islāmīyah fī al-ʻIrāq wa-al-Shām), abbreviated ISIL, ISIS, or from its Arabic acronym as DĀʻiSh or DAISH (Arabic: داعش‎ Dāʻish), now officially calling itself simply the Islamic State (Arabic: الدولة الإسلامية‎ al-Dawlah al-Islāmīyah), is an “unrecognized state” and active jihadist militant group in Iraq and Syria.It is a self-proclaimed Caliphate. ISIS witnessed significant growth as an organization owing to its participation in the Syrian Civil War and the strength of its supreme leader, Abu Bakr al-Baghdadi.
ISIS largest funding source is Saudi Arabia and other Gulf states, as well the material aid (lethal and non lethal) and support provided by the United States both directly and indirectly to Syrian rebels groups opposed to the Bashar Al-Assad regime and its inclusive government of  diverse ethnic and religious groups, including the majority Arab population which includes; Alawite, Druze, Sunni and Christian communities. Other ethnic groups in Syria include; Armenians, Assyrians, Kurds, Yezidi and Turks.
General Esmayeel Ahmadi Moqaddam is quoted as saying the following during the news conference:

“Some people linked to the Islamic State of Iraq and the Levant (ISIL) may be arrested at Western borders, but no command from the ISIL has entered the country (Iran).”

He also reiterated that the country’s borders are” closed against terrorists”, and there is no concern about terrorism spilling over into Iran because of it.

“Hopefully, we are observing all activities and movements in terms of intelligence across the borders of Islamic Republic, and there is no concern,” General Ahmadi Moqaddam said, as he sought to reassure the Iranian nation that officials have a firm grip on the situation.

According to him the ISIL terrorists are operating in Northern and Northwestern Iraq near the country’s borders with Turkey and Syria.

A few hundred kilometers to their East is the border with Iran’s Western and Northwestern provinces. Unconfirmed reports suggest Iran has also moved forces in the region in case it is ordered to defend the nation or the world from the threat posed by these US backed Sunni Islamic terrorists groups.

We contacted the Iranian embassy in Stockholm, Sweden through an intermediary on Facebook, about this situation asking for comments of US involvement in providing weapons and material support to terrorist groups in Syria, which is helping destabilize the entire region.

The official we talked to, who wished not to be identified in this report, would only say “that the US and Saudi Arabia are behind this effort to assist rebel terrorist factions in Syria, chiefly through its ally Turkey – where most of the weapons are being smuggled into Syria…”

The official also indicated that, according to Iranian intelligence ” most of the weapons seized in Syria trace back to Iraq and the US military and its NATO allies. Some complete with US or NATO markings on munitions boxes and crates of ammunition…”

This information confirms previous reports we received through a variety of sources.

We then offered to pass along this information on to the FBI’s Genocide and war crimes unit and Justice Department contact who declined that on the basis that neither the FBI or Justice Department has the “authority or inclination” at this point to investigate the White House, the US military or Central Intelligence Agency for providing material aid to terrorist organizations?