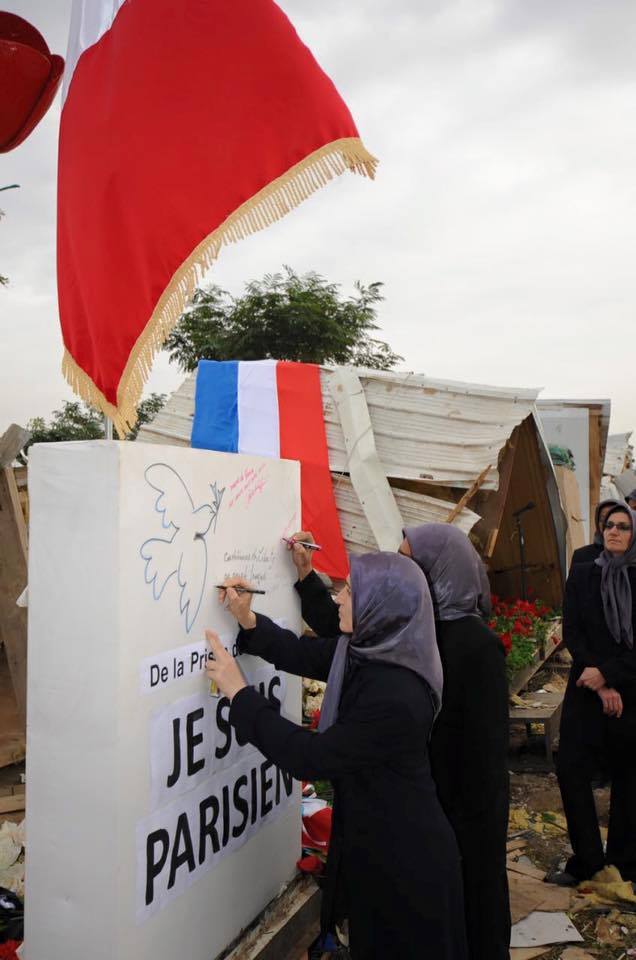 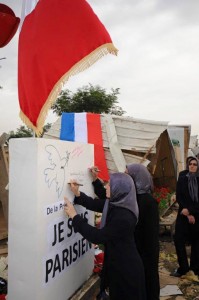 On Monday November 16th, Concurrently with similar ceremonies throughout the world, on occasions of the Tolerance Day, hundreds of Camp Liberty residents, in vicinity of Baghdad International Airport, dissidents to Extremist Mullahs in Tehran, gathered in a ceremony, to honor the memory of victims of Friday 13th November 2015 Paris Attacks.

By raising the tree color French flag as symbol of sympathy and solidarity, residents who have just survived a massive terrorist missile barrage on October 29, 2015, some still wounded, chanted the “Marseillaise” to show respect to people of Paris. Participants also honored the fallen with flowers placed on a symbolic monument.

Earlier, in offset of the attack, Maryam Rajavi President-elect of the Iranian Resistance (NCRI) strongly condemned the massacre of innocent people in Paris, describing it as savage terrorism and a crime against humanity. She expressed her condolences to the President, government and people of France over this great tragedy and offered her most sincere sympathies to the families of the victims.

Maryam Rajavi added that tonight humanity’s conscience is in a state of shock and disbelief on how such crimes can be committed in the name of God and religion. The Iranian people, who for the past 37 years have been under the yoke of the mullahs’ religious dictatorship and the rule of terror by the ‘Godfather of Daesh’ (ISIS, ISIL, IS), have experienced such crimes and fully comprehend the French people and their feelings in these hard moments and share their agony.

As part of ceremony a memorial plaque reading “Je Suis Parisian” was signed and residents expressed their love and affection in small phrases:

From Liberty ‘prison’… to the nation of France, our hearts are with you.
We feel the pain and the anguish of the victims of Paris terrorist disaster.
We express our condolences to the government and the people of France.

This ceremony ended after two hours with best wishes for peace and stability for all people of the world, especially in the turmoil Middle East.

Shahriar Kia is a press spokesman for residents of Camp Liberty, Iraq, members of  Iranian opposition the People’s Mujahedin Organization of Iran opposition group(PMOI, also known as MEK). He graduated from North Texas University. His Twitter handle is @shahriarkia