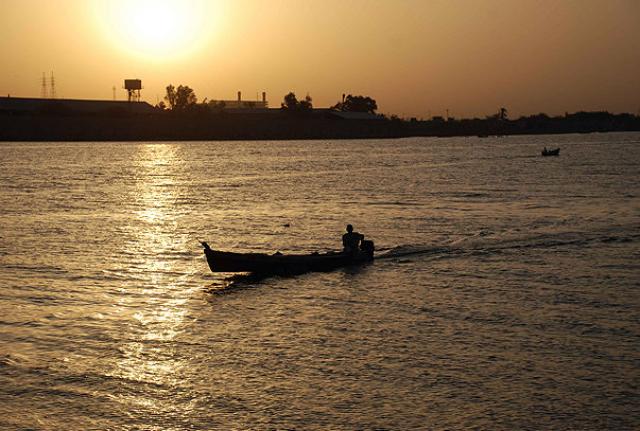 Lifelong fisherman Mohammad Mishlat was born in a reed house on the bank of the Karma river just before it splits from the Shatt al-Arab and bends its course through the ancient city of Basra.

Now 70 years old, Mishlat can’t recall a single sunrise he hasn’t watched from his boat as he sets out for the day’s catch on the maze of rivers, streams, canals and marshes that make up Iraq’s most famous, and now endangered, waterways.

“I was born [close to] the river. The waters here are like my family, and for almost seven decades we have never been apart,” he said as he waved away a halo of flies buzzing his head in the mid-day heat.

Mishalat is one of the tens of thousands of Basra province fisherman, who along with the boat builders, net weavers, fishmongers and others now find their traditional livelihoods under fire from a raft of problems, including upriver dams, drought, pollution, the chase for oil and over-fishing.

The waters around Basra, specifically the Shatt al-Arab which is formed by the merger of the Tigris and Euphrates rivers as they pour into the Persian Gulf, have become victims of Iraq’s wide-ranging water problems, and a tragic example of their social consequences.

“We get our whole lives from the rivers. We don’t know any other profession. We used to catch fish in abundance, but now, every year, every season, there are less fish. Many people have moved away and others have taken new jobs. For the people here, working in a shop or a factory is an unnatural thing,’ Mishlat said.

The most commonly cited reason for the decline of fishing in the Basra area is increasing salinity brought on by an encroaching sea. In 2009, the government of neighbouring Iran ordered the diversion of the Karun river, one of the main tributaries of the Tigris. The river was channeled back into Iranian territory from its natural confluence with the Tigris just north of Basra, depriving the Shatt al-Arab of some 13 billion cubic metres of freshwater each year that served to flush out the vital ecosystem.

Dams on the headwaters of the Tigris and Euphrates in Turkey and Syria have also wreaked havoc on the Shatt al-Arab. Efforts to mitigate a disastrous Saddam Hussein-era programme to drain the wetlands – which was intended to punish rebellious locals – have been hampered by rapacious oil-drilling and exploration activity.

Local officials claim at least 30,000 fisherman and farmers have been forced to leave their homes in search of other work; other estimates are as high as 100,000.

Alaa al-Badran, head of the Agricultural Engineers of Basra and a member of the Committee for the Revitalisation of the Marshes, described the condition of the local waterways, once known as the Venice of the Middle East, as a “catastrophe”.

“There has been a significant drop in fish stocks and I predict even more decline, not just due to the level of salt water. There are new factors such as a growing level of pollution as well as over-fishing and the use of poison for fishing in addition to the drying of entire areas for oil extraction,” Badran said.

“Many of the sub-rivers and streams that surround Basra are filled with sewage now because the waters are stagnant. Locals come to me all the time and tell me the environment is ruined.”

Abdullah Iyadia, an authority on Basra folklore and a longtime columnist for Basra’s now-defunct al-Manara newspaper, believes the decline of the fishing industry has deeply affected the collective psyche of local residents.

“When Arabs first came to Basra in 14 Hijri (636 AD), The first thing they did was build a mosque and have a feast. The first dish served was the fresh fish found abundantly in the local rivers. It has been on the table for Basra residents ever since. Fish is probably the most important thing to the people here, and it is one of the main characteristics of Basra, along with palm trees and rivers,” Iyadia said.

Iyadia draws parallels between the decline in the seasonal fish known locally as saburra and the loss of time-honored traditions. The saburra migrates from the sea into the Shatt al-Arab in February and remains there to spawn and lay eggs until October. For generations, fisherman like Mishlat have taken advantage of the lengthy fishing season and ordered their lives around the availability of the fish.

“For the last few years, the number of fish has been in constant decline. The fishermen spend long days on the water and still don’t get enough food to put on the table. Many seasonal festivals have been cancelled and the price for the fish that are caught is now too expensive for the people who catch them,” Iyadia said.

At the city’s oldest fish market, the Basra bazaar built in 1946, prices have skyrocketed and non-local fish are taking the biggest market share. Badran estimates that almost 80 per cent of the fish sold in the area are now imported.

This has done little to dampen the enthusiasm of Mohammad Fadhil, 50, a fish vendor at the Basra bazaar like his father and grandfather. Together with his four brothers, he works from 5am to midnight everyday and claims he “would never switch to any other job”.

“You see, the people of Basra can’t live without fish. Now that there is less local fish and the prices go higher and higher, they are buying fish from Iran and East Asia,” Fadhil said.

Fishermen have sought to adjust to the new situation, but with little success. Mishlat and his family have tried fishing in city of Faw, the southernmost tip of Iraq’s Persian Gulf peninsula. He claims that violent run-ins with rival fishermen from Iran and Kuwait in the contested waters drove him back to Basra where he’s back to fishing familiar, if fallow, waters.

“Here, look for yourself,” he said as he produced a reed basket bearing three meagre looking carp. “We have fished since before sunrise, and this is all I can take home.”

Ali Abu Iraq is an IWPR-trained journalist in Basra.