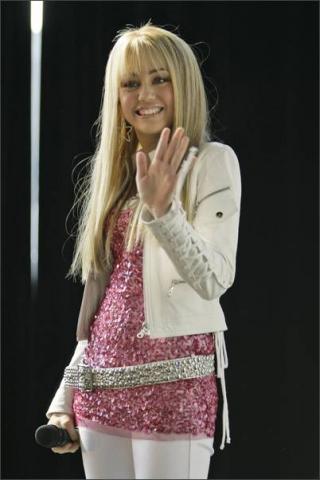 Who says, who says I can’t be Superman?

Who says, who says I won’t be president?

I say, I say you ain’t seen nothing yet!

annah Montana has exploded onto the scene of elementary and pre-adolescent popular culture.  Produced and promoted by Disney, Hannah (played by Miley Cyrus, daughter of Country music singer Billy Rae Cyrus) is “more than just your average girl” turned pop star.  There is Hannah the singing and performing sensation, Hannah Montana the television show, and Hannah Montana the merchandising empire. In short, Hannah Montana is inescapable. Corporate giant Disney has manufactured and promoted this teenaged, pop culture heroine and has achieved enormous success marketing the Hannah Montana brand franchise.

At first glance, Hannah Montana seems to be a parent’s dream come true.  Parents I have spoken with express enthusiastically that her character presents a positive role model to girls (and boys).  To them, her character suggests that with talent and dedication, any girl can achieve her dreams.  Miley is an adolescent girl who is, by day, an average, normal ninth grader, but leads a secret life as pop sensation Hannah Montana.  While maintaining a busy schedule of concert performances and glamorous public appearances, she manages with finesse to balance her life as a regular kid with humility and anonymity.  It is an interesting juxtaposition: being a just like every other teenager in her school, and then an extraordinary success story with irresistible star power outside of school.

On closer consideration, the phenomenon of Hannah Montana may reveal more about early 21st century corporate pop culture than Disney intends or consumers realize. I argue for an alternative critique of Hannah Montana.  What is assumed to be a liberatory discourse about “girl power” is in effect a new, insidious form of gender oppression.

Hannah’s message of self-empowerment is accompanied by unabashed materialism, socioeconomic inequality, marginalization of people from non-dominant backgrounds and a strong sense of entitlement justified on the basis of a meritocratic myth.  This phenomenon of pop culture demonstrates the unexamined conflation of democracy and free market economy.

In the TV show, Miley Cyrus plays a “normal” ninth grade girl who has a secret life as her alter-ego Hannah Montana the pop singer super star. She manages both lives with confidence and charisma while encountering some of the predictable challenges of normal adolescent girls. Recent episodes have focused on an ill-timed acne breakout and what to do about her best friend’s flirty boyfriend.  These problems are resolved in traditional sit-com fashion within 30 minutes and usually culminate in moral lessons learned (i.e., nobody’s perfect).

Set against broader themes of American consumerism and capitalism, the images of girls in pop culture reveal much about femininity and feminism and how success is defined in 21st century America.  Hannah Montana songs and image are informed by notions of personal freedom, meritocracy, and post-industrial capitalism, categories which themselves are evolving and historically constituted.  How is justice located and defined in these in these overlapping discourses?

In her interrogation of liberal multicultural pedagogy, Elizabeth Ellsworth (1992) posed the question, “Why doesn’t this feel empowering?”  Analagously, Hannah Montana’s brand of girl power reinforces an accepted and narrowly defined discourse of liberal feminism and consequently promotes an acquiescence to the pervasive consumer logic of 21st century American culture.  Does Hannah really have power?  Where is the power, really?

I like to turn it up and show the world….

In her song “Who Says,” Hannah Montana, a White, upper-middle class, heterosexual, teenaged girl, defines success as being “anything [she] want[s] to be” such as  “10 feet tall,” having “worldwide” fame, being “Superman” and “president” (ironically both masculine identities, so far), and being “glamorous just like you see in all the magazines.”  Her version of achievement is defined by masculine images of success mixed with trendy fashion. She has hit every desirable attribute in a list of sociologically significant and fallacious binaries:  White/minority, heterosexual/homosexual, upper-middle class/poor, worldwide/local, tall/short, glamorous/plain, extraordinary/average, abled/disabled, individual/collective.  Hannah is the epitome of everything hegemonic in our (mainstream) society. Moreover, she insists on describing herself as a girl rather than a woman, a much stronger image, in my view.  She tells us that she can be an ambitious “girl” while not sacrificing her feminine qualities:  I can be “soft and sweet or louder than the radio.”

All of this begs the question, to whom is Hannah singing, to whom does she have something to prove?  She has all these dominant qualities save that of the adult (White) male.  I suggest it is to that platonic, superior, male super-ego that Hannah is singing and performing. As long as you remember you are just a girl and therefore subordinate, the world is your oyster!

Another interesting binary is revealed in Hannah’s life: public persona/private teenager.  She may be a super star, but she is also “just like everyone else.” This echoes a familiar tension in American culture between conformity and rising to the top of the ladder of success.  These are two conflicting yet coexisting myths.  Conformity is a direct consequence of mass consumerism and national marketing of celebrity culture.  It is a prime example of what philosopher Maxine Greene has referred to as “media-imposed uniformity.”  It is problematic that Miley/Hannah must keep her two lives separate and secret.  She could be a more effective role model of emotional health if these two sides of her personality were integrated.  The negotiation of her stardom with her school and adolescent life would make for a more interesting lesson for viewers.  As it stands now, she appears to suffer from a normalized or habituated schizophrenia. However, this split-personality is integral to what makes Hannah’s success possible; without her disciplined humility as “you average girl” in her life as Miley, she would not have permission by mainstream cultural standards to be the bold face of Girl Power on stage.

How are children and adolescents today supposed to make sense out of the pressures to follow the latest trends but also the meritocratic imperative to find themselves and their star power?  How should parents and caregivers introduce the notion of giving back to the community and social responsibility?

The textual body of Hannah Montana is a site of power where discourses about gender, consumerism and individual success intersect in ways that support particular cultural practices and ways of thinking.  In a talk sponsored by the Klingenstein Foundation at Teachers College (November 14, 2007), Maxine Greene contended that mass media often “throws a blanket over us.” She used this metaphor to argue that popular culture, by its ubiquitous and univocal nature, smoothers our desire to think critically about hegemonic discourses and thereby imposes the silence of thoughtlessness on us. In silence, we accept our powerlessness to resist dominant cultural truths, even as they simultaneously oppress us.  It’s high time we throw off that metaphorical blanket and identify some of these cultural myths.  Once identified, those cultural myths can be recast as premises to be challenged and resisted. What cultural circumstances make is possible for Miley to be Hannah Montana.  Could someone else, who doesn’t share the same hegemonic markers of race and class reach the same popular success? Why must her stardom remain a secret from her peers at school?  And why is celebrity cast as an honorable goal?

Often, liberatory discourses appropriated by the dominant class lose their original meaning.  In our collective cultural memory, we may recall that 1970’s liberal feminism was perceived as daring and was also empowering for many people. Today however, feminism has become a dirty word in mainstream usage.  For example, Sarah Palin, like her or loath her, resisted identifying herself as a feminist, even though she had risen in politics to be only the second woman in U.S. history to receive the nomination for Vice President on the ticket of a major party.  In the recent Senate Confirmation hearings, we saw Judge Sonia Sotomayor lectured and interrogated by some Senators for in essence being an uppity Latina. (Please see https://www.groundreport.com/Opinion/Judge-Sotomayors-Meltdown-and-Kay-Corleones-Hyster for my discussion on this topic.)

As Maxine Greene (2000) expressed, “[T]elevision disseminates a myth of liberal triumphs.”  She continued:

For all the talk of global citizenship, multiculturalism, social justice and the rest, an untroubled positive-ism (an unexamined split between facts and values) has taken over in too many classrooms (p. 271).

I would add that this attitude has taken over youth culture in general.  As educational opportunities spill out of classrooms and into hallways, lunch tables and recess, and as pop culture permeates all aspects of students’ lives in the same spaces, phenomena like Hannah Montana present unintended curricular opportunities.  This is the space in which parents can step in and raise the issues conspicuously omitted in Hannah Montana’s songs and sit-com.  All of the images to which children are exposed are available for critique and reinterpretation.  The main consumers of Disney’s construction of Girl Power are children and adolescents.  We need to provide youngsters with the tools to rethink the gender roles available to them and thus unearth authentic possibilities for empowerment.