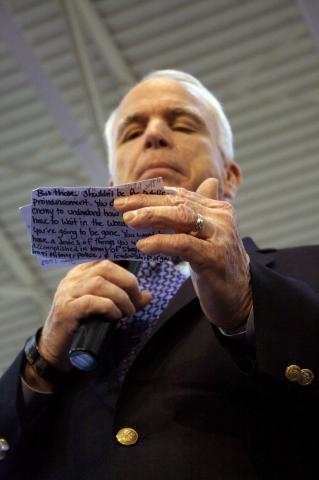 Numerous sources reported today that John McCain’s Chief of Staff, Mark Buse, is gay. This comes a quite a shock considering McCain and his vice presidential candidate, Sarah Palin, are against gay marriage.

Journalists Michael Rogers and Mike Signorile broke the news today and pointed a vindictive finger at Mark Buse for helping to elect a candidate who does not have the best interests of the gay and lesbian community at heart. Michael Rogers went as far as creating and presenting a plaque for Mark Buse for the "Ray Cohn Award" for "working against the interests of the lesbian and gay community while living as a gay man." Mike Signorile provides a detailed look into Mark Buse’s history, both political and sexual, and what impact the news of his sexual orientation might have.

John McCain has a history of supporting anti-gay legislation such as "Don’t Ask, Don’t Tell" and bans on same-sex marriage. His running mate, Sarah Palin, also does not support same-sex marriage and is a member of the anti-gay Pentecostal faith.

There are two videos circulating the Internet regarding the news that Mark Buse is gay. The first is a link to Michael Rogers’ effort to present Buse with the Roy Cohn award (click here) and the second is a video taken by Buse’s ex-boyfriend which you can see below.