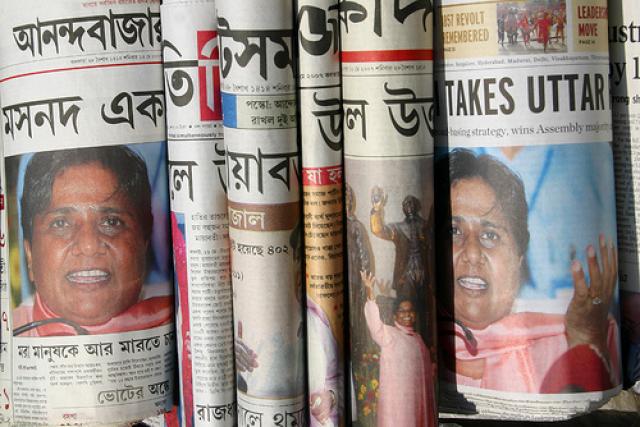 “Read all about it!” New media is said to be the new black, taking the journalistic world to new heights. Modern day technology is making advancements in a variety of areas, science, media, and health. Media affects our day-to-day lives, yet many are still unaware of the drastic change that is taking place. The question on many critics’ minds is whether new media is enriching the quality of journalism or slowly killing it. The audience have embraced this form of new media creating a generation of ‘bloggers’ and ‘citizen journalists’. Advertisers have realised the audience’s move and are now investing more money in online advertising. Mainstream media are clinging onto old values and standards which are slowly slipping away. So is new media killing journalism? Yes, I would have to argue it is. Don’t get me wrong, technophobia is not one of my fears. I embrace change, revel in the new technologies available to us, but at the price of journalism? New media is certainly not something to shout about.

Money is the largest concern for mainstream media. Newspapers are being exchanged for online news leading to circulation revenue becoming almost non-existent. The impact of this combined with the decline of advertising revenue means sharp cuts are being made in the media industries. Last year the BBC was told that the £90 million spent on newsgathering was too steep and they would have to make efficient savings of £4.5million. The outcome was sending fewer reporters out to cover stories in different countries and an increase in the citizen journalism. The real question that should be asked is “Can we really put a price on quality journalism?” The job of the BBC is to provide an informative service to the public and provide them with impartial reporting. Obviously it is a little naïve to believe that this impartial reporting is provided in traditional media. However, with the continuing cuts taking place there will be a alarming drop in the quality of the information on offer to the public. It could be argued that the quality of journalism has been declining for a while. It is now acceptable and easier to rearrange a press release than to send a journalist out to cover a story. Investigative journalism and embedded journalism is now practically none existent. Newspapers argue they do not have the funds to implement journalists abroad to cover overseas conflict. Instead an inexperienced journalist who knows nothing about the country or the conflict will write an article without any true depth or understanding of the situation. This is exactly what is happening with the conflict occurring between China and Tibet. Journalists have been taking sources from Chinese officials. Had they used a journalist who had been there long enough to see how Tibet and it’s culture has been destroyed by the Chinese, perhaps the information we were receiving would be more reliable. I have used Tibet as an example towards the declining quality of journalism which leads to inaccurate articles. The decline in income is due to the increase in new media; unfortunately it is journalism which is paying for it.

Budgeting in mainstream media has also led to severe job cuts. Last year the BBC’s news division, which employs around 2,000 journalists, was asked to find savings of 5 per cent a year for the next five year. As David Reid commented on the BBC website, “the internet is hitting papers where it hurts, in their pockets”. The dog-eat-dog world could intensify the competitive relationship between journalists. Rivalry between different online newspapers in a bid to secure advertising revenue could lead to journalists prioritising advertisers’ needs over providing what they are there to provide, the news. Human interest articles may begin taking priority over more newsworthy articles as this is what advertisers believe will draw the public in. The Internet is the fastest way to reach the public and the interactive graphics online allow the audience to go direct to the advertiser’s website. The danger with new media is that advertisers will become more domineering in what news we see and what news is ignored depending on what they are trying to sell.

The new media cannot be discussed without consideration of the new generation of ‘bloggers’ who are defining the term ‘citizen journalism’. The main argument in support of news media is that this generation of bloggers is providing open and collaborative journalism in comparison to the closed, hierarchical journalism in old media. This is where the debate really deepens. I agree with Russel Greenslade when he comments that "journalistic skills are not entirely wiped out in an online world, but they are eroded”. It seems that anyone who has something to say and can write coherently is now awarded the label of ‘citizen journalist’. If a citizen put out a small fire, would he then be a ‘citizen firefighter’? Some critics believe Bloggers’ enrich journalism with opinions and specialist information. However, when it comes to supporting what they say with sources and facts they are exempt from the rules. I am not questioning that these ‘bloggers’ do not always provide reliable expertise that sometimes even mainstream journalists can not challenge. It is worrying to think that some people are saying get rid of the article and just have the comments available to the public. The reason a lot of what they say cannot be taken seriously is that they shout over each other to be heard, resulting in many different opinions, no conclusion and sometimes a dispute . Donnacha Delong, part of the NUJ, says that “the professional journalist brings training, experience”. This relates to the ethical and lawful training journalists undertake to conduct an appropriate code of practice. Citizen journalists come from anywhere, they cross boundaries mainstream journalists would not dream of crossing and they leave a path of destruction.

The outcome of new media will affect everyone, especially you. Turn a blind eye to the changes taking place and in a few years it may become impossible to distinguish between comment, fact and advert. Our news will become a blur of sensationalised opinions and blogs.

Read all about it, not online but on paper.