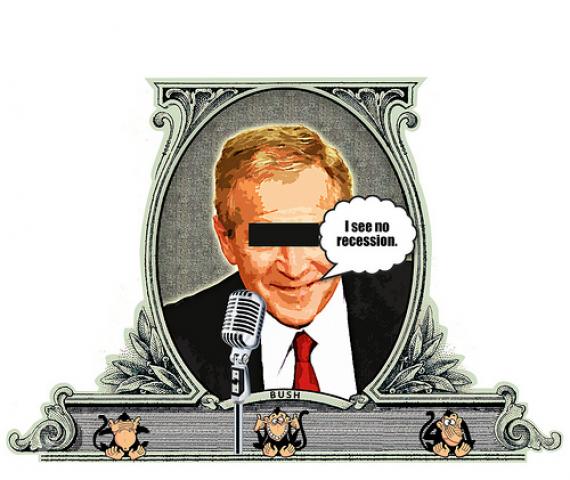 Everything in the universe is cyclical and recessions are a normal part of our economic system. Recession is tough but it’s better than socialized government, which seems to be where politicians want to take us, but they can’t take us there if we don’t let them.   Socialized government is where enormous amounts of taxpayer money is spent trying to protect people from themselves.  Most of the enormous amounts of money goes into the pockets of a select few.  A phrase that’s very popular in Washington is "Socialize the losses, and privatize the profits."

I agree with parts of the opinion stated in a “Recession By Design” article that I read a few weeks ago.  Most CEOs are paid far too much in comparison with the working blue collar person.  The problem of overspending, like was referred to in the article, doesn’t lie in the minimum wage, it lies with the people who feel it’s necessary to spend everything they make, and more.  If you get a raise no one, including the high paid CEOs, says you have to go out and spend it.

Have you noticed how many people spend an enormous amount of time, and money, on their cellphones?  The other day I had some PVC pipe and 2x4s that stuck out beyond the tailgate of my pickup.  I parked out of the way and waited while my wife did her shopping.  A large percentage of those who drove by were talking on their phones as they drove, while they parked, when they walked into the store, when they came out, while they loaded the car (with one hand) and when they were driving away.  Most cars in the parking lot were big, undoubtedly got poor gas mileage and probably aren’t paid for.  How many of those same people talk at great length about how expensive gas and groceries are?

Has it occurred to anyone that maybe there’s a connection between the cell phone price and cellular service, the big car and the high monthly payments and poor MPG, and the emotional attachment to the rising cost of everything?  It’s called priorities.  There was a line in the movie “Renaissance Man” that sums it up.  “The choices we make dictate the lives that we lead.”  If you decide that having a cell phone is a higher priority than making your mortgage payments, is it the responsibility of someone else who has chosen to pay by cash and carry to pick up the tab?  Do you dislike paying for someone else’s excesses?  I do!

When incomes drop, like it has for many people in the the past year or so, and the price of most items are going up, it’s time to rethink how and where we want our lives to go.  Actually, the thinking part should start during the boom times and not wait for the bust cycle to begin.

We don’t own a cellphone.  Being interrupted by someone else’s phone ringing is almost a daily, or minute by minute, rude occurrence.  I’m sure the world can do without my, or anyone else’s, input for a few hours at a time.  Humankind managed, until the last twenty-five years or so, to survive for fifty thousand years without being connected 24/7 to a cellphone umbilical cord.  I haven’t owned any vehicle that has gotten less than twenty MPG (without adding my modification to get twenty or more MPG)  since the first energy crisis in the 1970’s. If we bought a cellphone and an SUV tomorrow, I’m positive I wouldn’t be any happier.

I’m not in a race to see who can accumulate the most stuff.  In fact I’m doing the opposite.  I’m downsizing.  I’m reducing my stuff.  Anyone who believes that “He who dies with the most toys wins” will probably die first anyway from trying to afford and take care of all his toys. It’s true that you can’t take it with you.  Have you ever seen a hearse with luggage racks?

After awhile, and maybe this only comes with experience, you begin to realize that you don’t own anything.  The reality is, it owns you.  Remember the last time you thought you had some spare time, but then you had to fix something that broke or work extra hours to pay someone to fix something that broke?  If it didn’t own you, you wouldn’t have to fix it.  It’s the vested interest trap.  You can’t afford to give it up because you have too much time and money in”vested.”

You might think it’s hard to stop buying useless stuff, but a time of recession may prove to be a money saving lesson in the long run. You might wonder how you’re going to impress your friends.  Real worthwhile friends can’t be bought, and are impressed with who you really are and not what you have or what has you.