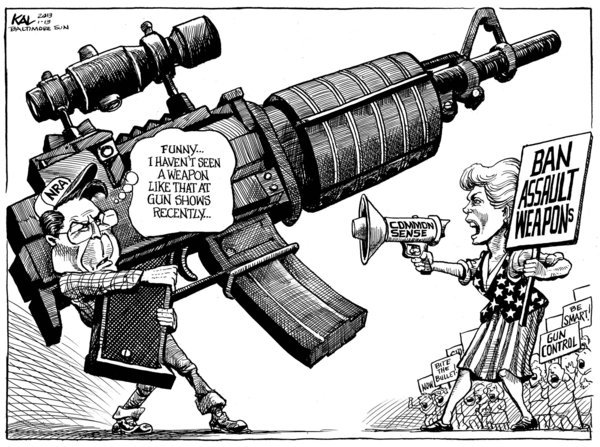 Here is a sad but true fact about the U.S. In large part, thanks to the gun manufactures lobby, the NRA and their supporters, in the last 50 years more Americans have been killed by gun violence than in ALL the wars the U.S. has ever fought. Unregulated gun laws is not the “Cost of Freedom” when nearly one million four hundred thousand Americans loose their most precious freedom, the freedom to live. The rightwing wants the right to deny others of their rights

It was the NRA that worked vociferously in congress, making large contributions to key members of both the House and Senate, to cut off funding to study by the Center for Disease Control on gun violence. Each year, the NRA hires nearly 30 professional lobbyists and spends nearly $3 million to buy off elected officials. And their efforts have paid off. Since 1997, appropriation bills have stated, “None of the funds in whole or in part made available for injury prevention and control at the Centers for Disease Control and Prevention may be used to advocate or promote gun control.” In 2012, congress expanded restrictions on gun research to include Health and Human Services agencies. That ended this year when President Obama issued a memorandum lifting the CDC’s freeze on gun research

As expected, within hours of the recent Washington Navy Yard shootings, Fox News and other mainstream rightwing media propaganda smear machines immediately called the military installation a “gun free zone”. The fact that there were both armed military personal and local police at the scene of the shooting didn’t deter the propagandist from making this absurdly false claim, in order to promote the NRA talking points.
In spite of the NRA deceptive rhetoric, which has been adopted by many on the right, in the last 30 years, there has never been an incident in which an armed civilian stopped a mass shooting. In addition, research has shown only a small number of mass shootings actually occurred in gun free zones.

The other main NRA/gun manufacturers/rightwings talking-points suggests that the more people arm themselves the less likely these mass killers will get away with multiple killings. However, the NRA’s b.s. is not supported by research. According to recent study on the relationship between gun ownership and gun violence by the American Public Health Association “Gun ownership was a significant predictor of firearm homicide rates (incidence rate ratio = 1.009; 95% confidence interval = 1.004, 1.014). This model indicated that for each percentage point increase in gun ownership, the firearm homicide rate increased by 0.9%. Conclusions. We observed a robust correlation between higher levels of gun ownership and higher firearm homicide rates. Although we could not determine causation, we found that states with higher rates of gun ownership had disproportionately large numbers of deaths from firearm-related homicides.”

It is only common sense that states/cities, towns, communities with higher gun ownership rates have higher gun violence. But don’t tell that to the insane rightwing Teabagging NRA supporters. Facts, public support, or common sense never gets in their way. That is how, in spite of the fact that polls showed over 91% of Americans called for federal laws requiring stronger background checks for purchasing a weapon, the NRA and their nutcase supports attacked congressional representatives with angry email falsely asserting imaginary unlimited Constitutional rights to own whatever weapon they please without any government oversight.

It is out of this campaign of political lobbying and intimidating rhetoric from the NRA and their supporters our nation seems paralyzed by the thugs that wage war on our streets and commit the most heinous crimes of mass shootings. There is no organization that has contributed more to the killing of innocent Americans than the NRA, a mafia of gun manufacturers and owners destroying America for ideology and profit.

Filed under: News, Politics
Share Tweet Pin G Plus Email
previous article: Russian rockets used in chemical weapons attack in Syria
next article: Surviving terrorism: What to do if a bomb blast goes off near your location