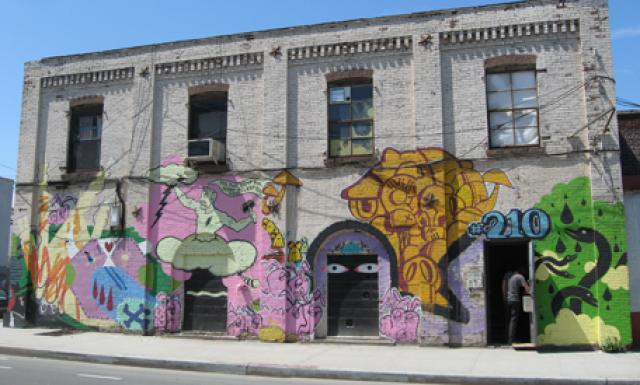 Many of the young creative upstarts previously populating bohemian neighborhoods like Brooklyn’s Williamsburg are moving out because their parents can no longer support them.

Many of the so-called hipsters in Brooklyn’s Williamsburg neighborhood are from affluent backgrounds, although they do their utmost to conceal it. With the current economic hard times, some of these bohemian twenty-somethings are having a hard time hiding the fact that they did, to a point, rely on their parents’ dime. Williamsburg landlord Ernie DiGiacomo told The New York Times that over the past six months, he’s seen many renters move out as their parents pull up financial stakes. Others working in the neighborhood’s real estate market have reported a drop in sales of condos and rents of luxury lofts, often funded by parents of recent college graduates. Says DiGiacomo in the Times, “Most of them are moving back with parents.”
A 40-year-old friend of Daily Finance writer Sarah Gilbert’s husband is reportedly headed back to his mother’s home in Connecticut after living a vagabond existence on couches and on basements. “I don’t have a job or a wife, so I figured it was a good time,” Gilbert quoted him as saying. “I don’t even have a girlfriend!”

The hipster crunch is being felt nationwide. According to The Wall Street Journal, Portland, Ore., another city considered a “youth magnet,” had an 11.8 percent unemployment rate as of mid-May, outpacing the nationwide rate. This is largely due to the city’s continuing influx of college graduates who can’t find work in a rapidly diminishing market. Gilbert mentions a Portland-area commodities broker who has moved into a pre-fab teepee in his parents’ backyard

Sources in this Story
Although those who arguably fit the description will deny any claim to the title, the term “hipster” typically refers to Gen X and Yers who work in creative fields that tend to be low-paying, if indeed they garner any money at all. Their uniform generally consists of ironic t-shirts, vintage clothes and old-style hats. Fashion magazine W offers a slideshow of current hipster garb, now synched to the recession by harking back to the Depression.

The official Web site of “The Hipster Handbook” offers several tips for determining whether you can claim the hipster title for yourself; such as “you graduated from a liberal arts school whose football team hasn’t won a game since the Reagan administration.”

Meanwhile, the hipster lifestyle continues to attract adherents, despite the financial crunch. Seattle and Austin, Texas, cities known for their thriving music scenes, still draw young, college-educated 20-somethings seeking a career amid idyllic scenery and against a live, avant-garde soundtrack.

Last summer, findingDulcinea cited an article in The Oregonian about three Portland bands going after their dreams despite the deepening recession. As previously mentioned, Portland remains an appealing destination for young college grads. Lawyer Stephen Anderson, 28 years old and formerly of Austin, told The Wall Street Journal that he’s happy with his job as a assistant at a Portland law firm: “I know I’m underemployed and if it bothered me more, I guess I’d do more to change it.”