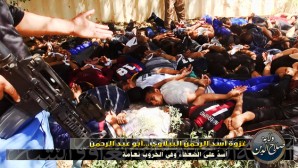 Some allege the US is supplying ISIL with weapons. there is also some evidence to suggest that is the case. Here an ISIS fighter holding a M-16 made in the US which he later used to slaughter the people in the picture (2014) YouTube.

A high ranking Iraqi provincial official spoke  out at the United States and their regional allies for supporting “Takfiri terrorists in Iraq”, revealing that US made weapons have been discovered from the areas retaken from ISIL terrorists.

A takfiri (Arabic: تكفيري‎ takfīrī) is a Muslim who accuses another Muslim (or an adherent of another Abrahamic faith) of apostasy. The accusation itself is called takfir, derived from the word kafir (infidel), and is described as when “one who is, or claims to be, a Muslim is declared impure.”

“We have discovered weapons made in the US, European countries and Israel from the areas liberated from ISIL’s control in Al-Baqdadi region,” the Al-Ahad news website quoted Head of Al-Anbar Provincial Council Khalaf Tarmouz as saying on Monday.

Tarmouz noted that the weapons made by the US, various European countries were discovered from the terrorists in the Eastern parts of the city of Ramadi.

Leading many in the  Iraqi Army  questioning where the weapons came from? Who bought them? And how did they get into the hands of ISIL which are using them to slaughter and terrorize Iraqis?

Meanwhile, the Head of Iraqi Parliament’s National Security and Defense Committee Hakem al-Zameli also disclosed that the anti-ISIL coalition’s planes have dropped weapons and foodstuff for the ISIL in Salahuddin, Al-Anbar and Diyala provinces. Al-Zameli noted that  the US led coalition is the main cause of ISIL’s survival in Iraq. In other words it was a critical re-supply effort.

“There are proofs and evidence for the US-led coalition’s military aid to ISIL terrorists through air (dropped cargoes),” he told FNA at the time.

In that incident the US may have accidently dropped weapons and supply on ISIL meant for the Kurdish resistance fighters. Hey mistakes happen in war. But I can’t see them intentionally supplying ISIL at the same time they have launched over 2000 airstrikes to cripple that organization at the same time. It doesn’t make sense.

What is real in this case is the ISIS video which was posted on Youtube.

“Oh what a tangled web we weave, When first we practice to deceive”, Walter Scott.

Note it is possible the US is supplying ISIL and doesn’t even know it?

Are these the weapons being supplied by the US via the CIA to radical rebel groups in Syria which are  “indistinguishable” in many ways  from ISIL and al-Qaeda, according to Senator Rand Paul of Kentucky. Senator Paul also warned members of Congress on September 8, 2014 at the time we could find ourselves in a situation where we are “facing our own weapons being used against us.”

That time it would seem has come.