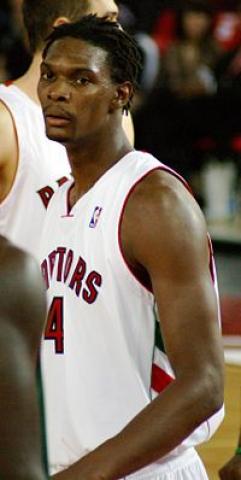 Toronto Raptors’ star Chris Bosh is not bothered by news reports depicting him as a ‘deadbeat dad’ in reference to his child support case filed by his former live-in partner.

The Raptors recorded the lopsided victory without starting centre Andrea Bargnani. The 23-year-old had his consecutive games played streak end at 130 because of a sore left heal. It was the first game the seven-footer has missed since Dec. 9, 2007 against the Houston Rockets.

Toronto got off to a hot start thanks to an 11-point run midway through the first quarter – capped by a mid-range jump shot from Marion to give the Raptors a 22-11 lead in front of a crowd of 17,610. Bosh recorded eight points and four rebounds while Calderon added seven points in the quarter.

Allison Mathis, describing herself as Chris Bosh former live-in girlfriend said she is seeking child support and custody of an infant she claims to be Bosh’ daughter. The court case has been filed in Maryland.

The Toronto Raptors’ power forward has been called a ‘deadbeat dad’ who left his girlfriend when she was seven month pregnant.

‘All I can say is I’m going to take care of my responsibilities like I’ve doing in the past and in the future and keep respect for everyone, he told reporters.

Chris Bosh is a young professional American basketball player in the NBA who is playing for the Toronto Raptors. He was born in Dallas, Texas on March 24, 1984. He studied at Lincoln High School in Dallas, Texas and in college at Georgia Tech.