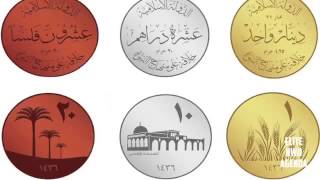 ISIL coinage is based on the Gold standard. It will also feature silver and copper coins as well.

The Islamic State terror organization (ISIL) has began minting its own gold dinars in a bid to break free from what it calls “the global economic order”, UK’s Telegraph cited sources  in ISIL-controlled Iraqi territories as saying.

Gold is considered, not only “a wise  financial investment in uncertain trimes, but it is also a tangible asset, and hedge against inflation.

The new “currency” standard would be based on the dinar coins minted by the Caliphate of Uthman ibn Affan and include seven coins: two gold, three silver and two copper, ranging in value from 7¢ to $694 (US), their values based on the intrinsic value of the metals

The prototype design of the coins, which have already began circulation, includes a world map, a Quranic image of seven wheat stalks and a slogan in Arabic that reads: “The Islamic State — a caliphate based on the doctrine of the Prophet.”

ISIL announced it was planning to trade in gold and “emancipate itself from the satanic global economic system.

There are also persistent rumors that some ISIL fighters killed on the battlefield in Syria recently were found to be carrying the new gold dinars. If true it means ISIL plans to begin trading in the new Gold & Silver based currency has already begun. This is extremely problematic for US spies, because for all practical purposes gold and silver coinage is untraceable.

ISIS pays its members roughly “$150 a day (US).” Which is a hell of a lot of money. For example ISIL fighters are paid twice as much as members of the Iraqi Army (which is 100% funded by the United States).

Now these same fighters will be paid in gold.

The IS also demands gold from Christians in Iraq and Syria. In one recent incident IS Fighters demanded 38 pounds of Gold from resient leaders in Raqqa, Syria, as a guarantee of their personal safety.

Note: According to Islamic law, the Islamic dinar is a coin of pure gold weighing 72 grains of average barley. Modern determinations of weight range from 4.44 grams to 4.5 grams of gold, with the silver Dir-ham being created to the weight ratio of 7:10, yielding coins from 3.11 to 3.15 grams of pure silver. A smaller denomination, daniq, weighs one sixth as much. The value of each coin is according to their weight and the market value of the two metals. The coins may be minted at fraction or multiples of their weights and valued accordingly