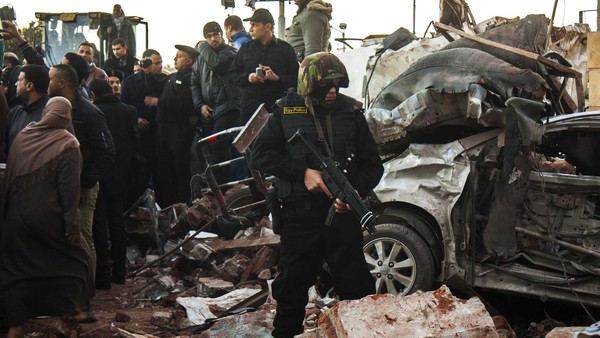 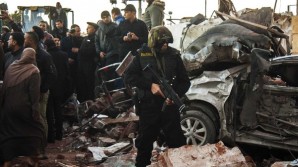 The bombed out wreakage of a police headquarters builing in Mansoura, Egypt where 13 people were killed in December 2013. Officials believe the terrorists in this case specifically targeted the police. This is just one of numerous attacks targeting police officials recently in what seems to be a trend among terrorist groups seeking to strike fear in the heart of a population.

RE: ISIL terrorists in the UK targeted police officers for assassination

TO WHOM IT MAY CONCERN:

I was reading a recent report in a British daily dated October 17 – a few hours ago – concerning ISIL operatives targeting police officers in the United Kingdom.

The article indicated that only last week, police chiefs issued an unprecedented alert to officers to be “extra vigilant” for their own safety because of the heightened terror threat.

The men (identifed as: Tarik Hassane, 21, of Ladbroke Grove, west London, Suhaib Majeed, 20, of St John’s Wood, north London, Nyall Hamlett, 24, of Notting Hill, west London, and Momem Motasim, 21, of Bayswater, west London – who have subsequently been arrested). The men were accused of planning to follow a “fatwa” (religious edict) by a senior Isil terrorist who called for followers to kill “disbelievers” in their home countries.

The men were said to have carried out “hostile reconnaissance” of Shepherd’s Bush Police Station (and White City Territorial Army Barracks) in London using Google Street View, according to the report.

They allegedly demonstrated “trade craft” by the use of code words for money, mopeds and firearms and discussed and agreed the sourcing of a firearm, Scotland Yard said. (source: http://www.telegraph.co.uk/…/Four-men-charged-with-terror-o…)

The Scotland Yard is very proactive in engaging the public on this issue with the set up of a anti terrorism hotline, and link for reporting suspcious activity – see: Anti-Terrorist Hotline on 0800 789 321 (source: http://content.met.police.uk/Site/terrorism).

It is unclear if the men had any connections to people within the United States by association or email.

According to various reports hundreds of ISIL fighters are American born and possible holding current US passports.

Perhaps precinct commanders might wish to be aware of this information and remind officers that ISIL is urging followers to kill people in the US/UK in response to the ongoing bombing campaign by the US military called : “Operation Inherent Resolve.”

Police officials and buildings seem to be increasingly targeted by terrorists.