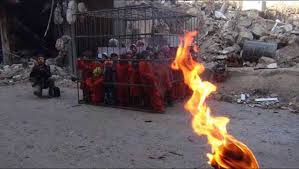 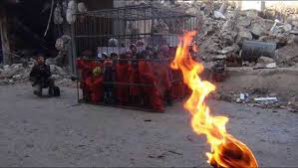 A picture posted by Pegida on Twitter showing ISIS threatening to burn children lock in a cage. We can only assume they did?

The Islamic State (AKA: ISIS) has reportedly burned alive 45 people. This current crime is the second case of burning people to death this year by the terrorist organization.

In the beginning of February, the insurgents released a video showing the execution of Jordanian pilot Moath ak-Kasasbeh. Al-Kasasbeh was captured by militants in December, when they downed his jet over Syria as it participated in US-led airstrikes against the militant group. As shown in the video the pilot was burned alive in a cage.

Some of the executed people may be from Iraqi security forces, but no precise data was given.

ISIS have burned to death 45 people in the western Iraqi town of al-Baghdadi on Tuesday, according to reports. This location is just five miles away from an air base staffed by hundreds of U.S. Marines.

Syrian sources say burning is common by ISIS in Syria, which burn those people it calls apostates. Why burning? “Hell is on fire”, said one Muslim who wished not to be identified. “Its significant also in terms of Judgment and punishment, as well in sending a message to your enemy .”

Suicide bombings, it would seem has given rise to decapitations and crucifixions and, now, immolations.