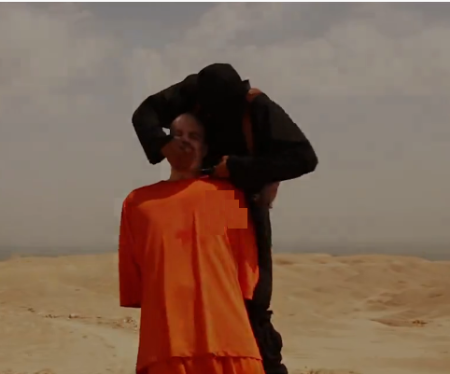 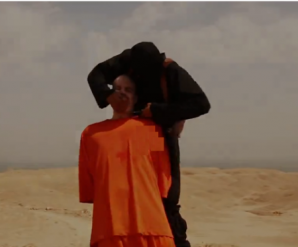 A US backed, trained and equipped ISIS fighter begins to cut and hack the head of American Journalist James Foley.

On August 20, 2014 U.S. Senators John McCain (R-AZ) and Lindsey Graham (R-SC)  released the following statement on the murder of James Foley and the need for comprehensive strategy to defeat ISIS:

“All Americans, and civilized people everywhere, are shocked by ISIS’s appalling murder of James Foley, and we join together today to celebrate his life, mourn his loss, and hold his family uppermost in our thoughts and prayers.

“In this cowardly and gruesome murder of an innocent man, we see the true nature of the evil that confronts us. As President Obama rightly said today, ISIS has nothing of value to offer the world, only terror, slavery, and death. It is an enemy of humanity, a darkness that will spread as far as it can, unless it is stopped.

“We agree with the President that America must take the necessary actions against ISIS to protect our people, but ISIS is not just a threat to our personnel serving in Iraq. It is a threat to our nation, as all of our top military, national security, and intelligence leaders have clearly stated. America and our allies and partners will only be secure when ISIS is defeated. That means we must get beyond half-measures, tactical responses, and defensive actions. We need to develop a comprehensive strategy – political, economic, and military – to go on the offensive against ISIS, both in Iraq and Syria. As we have seen in recent days, the combination of U.S. air power, together with the provision of arms and advisers in support of partners on the ground, can have devastating effects. We should step up these efforts as part of a broader strategy to eradicate ISIS. Unfortunately, in his remarks today, the President did not articulate a commitment to the comprehensive strategy necessary to defeat ISIS.

“No one believes there is a purely military solution to the threat posed by ISIS. Ultimately, its baseless ideology must be countered and replaced by a positive vision of hope and civility, as the President said today. But these values, and all who share them, must be defended with force when they are threatened, as they are today by ISIS. We cannot allow the darkness to spread, and we must accept our share of the responsibility to stop it, for the sake of our people and the entire civilized world.”

The stance of both Senator McCain and Lindsey Graham is very hypocritical given the fact that the US helped train and equip ISIS?

Filed under: News, Politics
Share Tweet Pin G Plus Email
previous article: Arms Tighten Beneath A Magnolia Haze
next article: President Obama should call the Public Relations Society of America for help in his foreign policy!