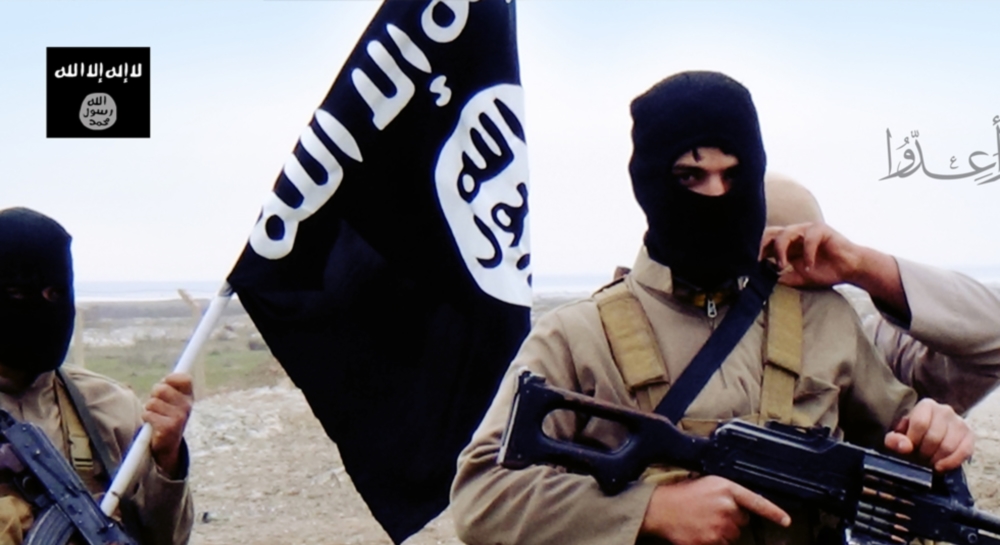 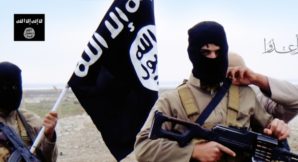 ISIS rebels in Syria. Note they fly the Black flag of al-Qaeda. This is part of the same group fighting Bashar Assad in Syria, which the US and Saudi Arabia have for years now been providing weapons and other lethal aid to?

On June 20, 2014 Senator Marco Rubio of  Florida asked for permission to address the United States Senate regarding the situation in Iraq.

“I believe the United States, working in conjunction with others in the region, needs to do everything we can to cut off ISIL’s supply lines. Many people may not be fully aware of this, but ISIL or ISIS–the same group involved in Syria–is not simply a bunch of Sunni Syrians or Sunni Iraqis; these are foreign fighters, including hundreds who are estimated to have come from the West, who have flocked to Syria and now Iraq to participate in this fight.

In addition, this group, in order to make the advances and the gains it is now making in Iraq, requires–as any force would–distinct supply lines that allow them to transport individuals and weapons and ammunition, in addition to, by the way, the things they are now getting their hands on as they make these advances. So one of the goals the United States must have, working in conjunction with others, is to sever those supply lines so they cannot continue to make these gains.

Secondly, I hope what the President announced today as the beginning of a process will, in part, also focus on the command and control areas they currently operate from within Syria. Without those safe havens, they would not possibly be able to expand the reach they now have. So I hope, again, that what the President announced today is but a first step toward a multistep process that allows us to address those two issues.

In addition, I think it is important to continue to revisit the issue of the opposition in Syria. When people read about the opposition in Syria, it is important to note there is no such thing as the opposition. There are a handful of groups operating within Syria against the Assad regime, but these groups also fight each other, and there is a group of nonjihadists, nonradical terrorists who are fighting in Syria to topple Assad, but this group also takes on the al-Nusra Front and ISIS. I have for many months now been calling on the administration to do more to capacitate these groups, the nonjihadists. I felt it was a mistake not to do so early on because that actually created the possibility or the eventuality that now we face; that is, that the best organized, best equipped, best trained groups in Syria happen to be the most radical ones. That includes ISIL and of course al-Nusra. By the way, al-Nusra and ISIL fight each other, which adds further complexity.

Last but not least, I think it is important to spend a significant amount of focus on helping our allies in Jordan. If we play out what is happening–if, in fact, ISIS is able to erase this border between Syria and Iraq and establish this Sunni caliphate, their next move logically will be to threaten the Kingdom of Jordan, an incredibly important ally to the United States, to the stability of the region, to Israel, and to others. So we should continue to provide assistance to Jordan in protecting their borders and their future.

These are four goals I hope we will continue to move toward, and I am hopeful that with the announcement the President made today, it is a first step as we work toward those goals.

A couple of points are important to make, and I do so every time I address this issue of Iraq. The first is this is not about the United States taking sides in a Sunni-Shia civil war. The future of Iraq depends on the people of Iraq. It is up to them to establish a government that functions. It is up to them to provide a secure and safe country where people can prosper. It is up to them to create a political system and a social system where both Sunni and Shia feel as though they have a voice in the governance of their country. This is not about the United States stepping in and saying, We are on the Shia side. In fact, I can tell my colleagues that while this is not uniform, there are many Sunnis within Iraq who do not necessarily sympathize with ISIL and what they are doing. So this is not about the United States engaging itself in a civil war.

Every time I come to the floor, I remind everyone that the reason 9/11 was possible was because Al Qaeda was able to establish a safe haven in Afghanistan, under the protection of the Taliban, and from that safe haven they raised money, they recruited, they plotted, they planned, and they ultimately carried out the most devastating terrorist attack in U.S. history, and we can never allow another similar safe haven to take root.

This is especially true when the group trying to establish such a safe haven–in fact, not just a safe haven but a caliphate run by a radical government–is a group whose expressed goal is to establish that caliphate, to use it to terrorize the people of the United States by attacking us in the United States, in the hopes of driving us out of the Middle East and then destroying Israel and establishing their brand of Islam and forcing it on all the peoples and countries of the region.

We cannot allow such a safe haven to take root. If they are successful in their goal of creating a new country, a new State, this Islamic radical caliphate, we will have in the future grave risks and potentially severe and devastating terrorist attacks against Americans both abroad and here in the homeland. This group has a very clear mandate. They have been very clear about what their goals are, but in order to carry that out successfully, they need an operational space, and we cannot allow them to create one in Iraq. That is what this issue is about. That is why this issue matters.

I know when I say what I have said, I open myself to those voices that say there are warmongers and people who want to go back to war. Absolutely not. On the contrary. What has happened is, after looking at this issue, studying the lessons of the past 20 years and what we have learned after 9/11 especially, it becomes evident to me that we are going to have to deal with this group. That is not what we are debating. The issue before us that we have to decide is when do we deal with them? Do we deal with them now, when they still have not created that caliphate, or do we deal with them 5 or 10 years down the road when they have established a safe haven and significant operational capacity? It is going to cost a lot more money, potentially many more lives and, in the process, significant terrorist attacks and terrorist risks if we deal with it later. It will cost less money, be more effective, and be a lot less dangerous if we deal with it now.

That must be our goal, to not allow this group ISIS to establish a safe haven of operation in Iraq, or in Syria for that matter, and then give the people of Iraq the opportunity to decide a future for themselves. That is important, which is why this issue of Iran is important.

I have been asked by reporters and others: Should we be working with Iran? My opinion, based on all I have learned regarding this situation and based on factors that are obvious for anyone to see, is we do not share the same goal Iran does. We don’t have the same goal. Iran’s goal is not simply to defeat ISIL. Iran’s goal is to establish a Shia government that oppresses Sunnis and that is responsive to them. That is their goal. What they want to set up in Iraq is a public government under the control of Iran. That is not our goal, that should not be our goal, and it never has been our goal.

Our goal is to ensure that a terrorist organization cannot establish a safe haven, and our hope is that the Iraqi people can create for themselves a government and a country where both Shia and Sunni can live in peace and harmony among each other. That is up to them. We can help them do that, but we can’t make them do that. What we can do is everything we can to ensure that this terrorist group doesn’t take root. So I think our goals are completely incompatible with Iran.

The other point I would make is we should not do anything to legitimize that regime. That regime is the world’s greatest State sponsor of terrorism. In virtually every continent on this planet, Iran has a hand in sponsoring terrorism. So I am not sure how we could possibly work side by side to wipe out terrorism with a government that sponsors terrorism more than any other government on the planet. I caution against that approach as well.

To close the loop, I hope we will spend most of our time focused on what we need to do now and in the future. We have forever to debate who was right and who was wrong about the war in 2003 or the surge in 2007.

Also, I hope the announcement the President made today was the first step in a multistep process that will allow us to prevent ISIL from establishing the kingdom, the caliphate, and the safe haven they seek. I hope we make clear to the American people what the stakes are for us, that the reason we care about what is happening in Iraq is not because we want to nation build or because we want to force any sort of government on the people of Iraq. Their future belongs to them. It is because we cannot allow a terrorist group that has the stated goal and the increasing capacity of attacking the United States to establish an operational space such as Afghanistan was for Al Qaeda before 9/11.

I hope we will continue to play the important role the Senate plays in speaking out and hoping to give guidance and advice to the Commander in Chief. But as I said yesterday, ultimately, the role of leading on this matter corresponds to the President. Only the President of the United States can come up with a plan that hopefully all of us can unite behind because it is that important for our country and for our future and for our security. I yield the floor and suggest the absence of a quorum”, said Rubio

See video: Iraqi militant leader explains why his men fight along side ISIS in Iraq http://www.youtube.com/watch?v=G_xJ-rA0POc

Filed under: Military, News
Share Tweet Pin G Plus Email
previous article: Has the Obama administration ever armed ISIS with lethal weapons? Inquiring minds would like to know!
next article: Grand Canyon University students should avoid travel to Mexico during spring and summer break