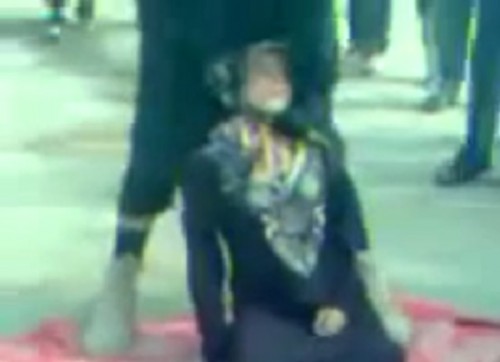 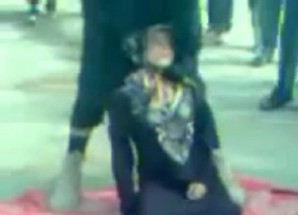 In Syria ISIS fighter strangles a little girl to death for violating Sharia law, in a public execution where her parents were forced to watch.

On June 12, 2014 Senator Graham asked for permission to address the United States Senate regarding the situation in the Middle East, in particular Iraq and Syria:

“Senator McCain was on the floor, and I am sorry I missed him. I was in a briefing.

To the American people, the situation in Iraq is dire. Syria has become a launching pad for attacks against the Iraqi people.

The ISIS–we don’t know who these people are, but we are going to get to know them–are Islamic jihadists based in Syria and Iraq. They are an army, and they are not a bunch of hoodlums.

They have a very specific game plan. They want to create an Islamic caliphate and basically dominate Iraq and Syria. Some want to go to Lebanon and want to create an Islamic state that will be ruled under the most extreme version of Islamic law one could imagine–hell on earth for women, not good for us, the end of modern thought in that part of the world. The people of Iraq and Syria are not by their nature radical Islamists. The people who are beginning to win the day on the battlefield come from all over, and they truly are radical Islamists who would put the world in darkness if they could.

The next 9/11 is in the making as I speak. These people are using Syria and now Iraq as a training ground for international jihad. There are European jihadists and American jihadists over in the Syria as I speak. Over 2 weeks ago, the largest truck bomb explosion by a suicide bomber in Syria was by an American citizen. And, I hate to say it, but there are more over there today.

The question for the United States is: Does it really matter if the ISIS dominates Syria and Iraq or any part thereof? I think it does. I think it is a very bad scenario for us. I think it directly impacts our security here at home, and it will throw the region into chaos.

It is clear to me, after the briefing, there is no scenario by which the Iraqi Security Forces can stop the advancement of this group toward Baghdad. I don’t think they go much beyond Baghdad, because then they get into the Shia areas of Iraq. That would be one hell of a fight. But Mosul has fallen, Tikrit has fallen, Fallujah has fallen. Now they are marching to Baghdad. Unless something changes, they will be successful.

They are sending the military equipment they are seizing into Syria to help their cause there. This is a very dangerous situation.

I urge President Obama to go on national television, explain what is going on in Iraq and Syria, and make the case to the American people why we should stay out or why we should do something.

I think American air power is the only hope to change the battlefield equation in Iraq. I know no American wants to set boots on the ground, and I don’t feel that is a solution worthy of consideration at this point. But I have been told by our military commanders the Iraqi army is in shambles, and without some kind of intervention, Baghdad is definitely in jeopardy, most of the Sunni areas of Iraq will be run by ISIS, and they will join forces with their colleagues over in Syria.

I end with this thought. I remember discussing Iraq with President Bush as if it was yesterday. I went over on numerous occasions with Senator McCain early on after the fall of Baghdad and every trip it was worse.

I remember the Bush administration telling us: These are just a few dead-enders. Everything is fine. The media is hyping all the problems because they don’t like President Bush.

I remember sitting down with President Bush, his administration and his team, and Senator McCain, and we candidly told President Bush: If you don’t adjust your strategy, if you don’t reinforce Iraq, we are going to lose.

To his credit, he did, and the surge actually worked. We left Iraq in a very good spot. The security forces had won the day. We had driven out Al Qaeda. Politics was beginning to take over. Violence had been reduced tremendously. The surge worked. Our military did their job, fighting alongside their Iraqi counterparts. But the decision to withdraw from Iraq created a crisis of confidence, a capability crisis. When there is a vacuum in the Middle East, people go back to their corners–and that is exactly what has happened in Iraq with the lack of an American presence.

Here is what is so heartbreaking. Some 10,000 or 15,000 U.S. soldiers strategically placed would have held this together and politics would have taken over. But it is hard to do political agreements when you are subject to being killed by people on the other side. You need a certain level of security to advance society.

That security has completely been lost in Iraq, and Syria is a contagion for the entire region.

Our indecision and indecisive action in Syria–it was bipartisan, by the way. Plenty of Republicans said: Stay out of Syria; it is none of our concern.

What Senator McCain and I have been worried about in Syria for about 3 or 4 years is that Iran and Russia were behind Assad. It is not in our interest for Iranians to be in Syria because it is very hard to get them to abandon their nuclear program if they think we are weak in Syria, and it is in our national security interest for Syria not to become an Islamic state.

About 3 years ago there were 500 foreign fighters. Today there are 26,000. So to those Republicans and Democrats who said stay out of Syria, don’t use airstrikes or air power, I am sad to say that I think you were wrong. I think Syria has become an absolute breeding ground for radical Islamists, and the next attack against our country could very well originate from the people who are fighting in Syria today. And I have never been more worried about another 9/11 than I am right now.

So, Mr. President, if you are willing to adjust your policies, we will sit down with you. If you are willing to sit down with your generals and get some good, sound military advice, we will stand with you because what happens in Iraq and Syria does matter. I don’t think we need boots on the ground. I don’t think that is an option for consideration. But if our military leaders say that we need to stop ISIS because it is in our national security interests through the use of our air power, count me in if that is what our generals say.

I will stand with you, Mr. President, if you correct your policies. If you continue to be delusional about the world, I will be your worst critic.

With that, I yield back”, said Senator Graham (source: Congressional Record http://thomas.loc.gov/).

NOTE: ISIS – The Islamic State in Iraq and the Levant  abbreviated as ISIL or ISIS, is an active Jihadist militant group and unrecognized state in Iraq and Syria influenced with Wahhabi movement.

Source: This spread of ‘holy fascism’ is a disaster http://therearenosunglasses.wordpress.com/2014/05/18/the-dangerous-spread-of-wahhabi-holy-fascism/

In its unrecognized self-proclaimed status as an independent state it claims the territory of Iraq and Syria, with implied future claims intended over more of the Levant (e.g. Lebanon). It was established in the early years of the Iraq War and pledged allegiance to al-Qaeda in 2004. The group was composed of and supported by a variety of insurgent groups, including its predecessor organisation, the Mujahideen Shura Council, Al-Qaeda in Iraq, Jaysh al-Fatiheen, Jund al-Sahaba, Katbiyan Ansar Al-Tawhid wal Sunnah, Jeish al-Taiifa al-Mansoura, etc., and other clans whose population profess Sunni Islam. It aimed to establish a caliphate in the Sunni majority regions of Iraq, later expanding this to include Syria.

Source: Battle to establish Islamic state across Iraq and Syriahttp://www.independent.co.uk/news/world/middle-east/battle-to-establish-islamic-state-across-iraq-and-syria-9510044.html

In February 2014, after an eight-month power struggle, al-Qaeda cut all ties to ISIL.

It should be noted that the only ones successful in killing ISIS terrorists are the Syrian Army which have become specialists at it (see video: Army strikes hard against ISIS terrorists http://www.youtube.com/watch?v=7Oso3ay1N7k).