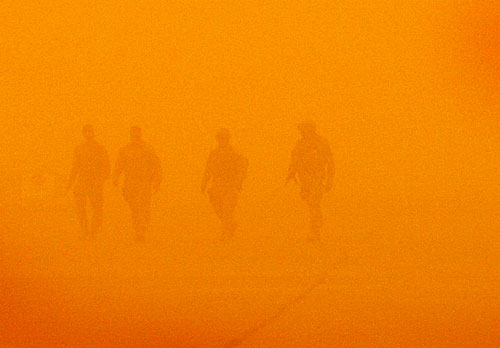 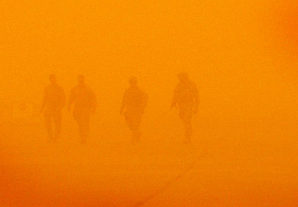 Islamic State fighters (AKA; ISIS) used a weather event or in this case a  “sandstorm” to help seize control of and gain a critical military advantage in the early hours of the terrorist group’s attack on the provincial Iraqi capital of Ramadi last week.

A sand storms arise when a gust front or other strong wind blows loose sand and dirt from a dry surface.

Exploiting prevailing weather – the tactical use of weather as a force multiplier has influenced many important battles throughout history.  This was no exception.

Increasingly terrorist are adapting themselves to attack on days that are overcast, cloudy or raining, because they know that US drones and fighter jets have a hard time operating in those types of weather events.

The ISIS attack on Ramadi began with a series of strategic car bombings followed by a wave of ground attacks in and around the city that eventually forced the Iraqi security forces into full retreat.

Islamic state fighters were also using Fire and movement (also known as leapfrogging) – working in ‘fire teams’, one team attempts to suppress the enemy while the other moves either toward the enemy or to a more favorable position.

There were also unconfirmed reports of electronic countermeasures being used by ISIS as well.

These factors lead to the success in the ISIS military take over of Ramadi.

Key targets in the attack included the Iraqi Government Headquarters where it seized confidential records and intelligence information.

IS fighters also captured weapons and equipment abandoned by the Iraqi Security Forces and their American military advisors during the fight.

Over 500 people were reported killed in the fight, including civilians and another 8,000 people fled immediately, according to independent news services.

Note: Ramadi (Arabic: الرمادي‎; BGN: Ar-Ramādī) is a city in central Iraq, about 110 kilometers (68 mi) west of Baghdad and 50 kilometers (31 mi) west of Fallujah. It is the capital of Al Anbar Governorate