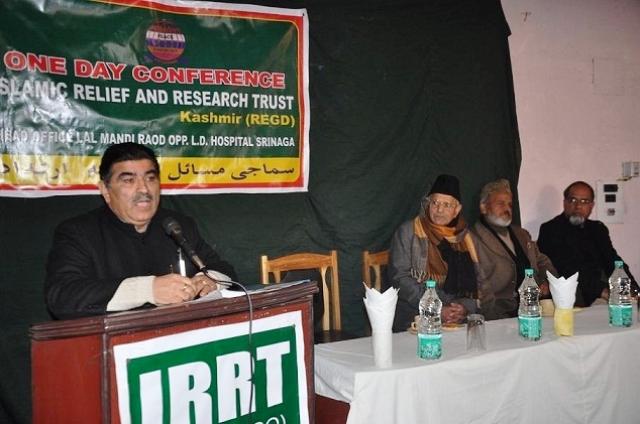 , December 11 (Scoop News) – Islamic Relief & Research Trust Kashmir (IRRT) organised a one day conference on the topic ‘Social Issues and Apostasy (Samaaji Masaail aur fitnah e irtidaad)’. A galaxy of religious scholars, intellectuals, social activists, and members of civil society, students and other people attended the conference. The conference was formally started with the recitation of the Noble Quran. The welcome address was given by Advocate Abdur Rashid Hanjura, chairman IRRT. He gave a brief introduction of IRRT and its activities. Retd. Justice Bashir Ahmad Kirmani delivered the keynote address dealing with the topic in a wider historical, social, economic, political and religious framework.

He opined that the moral waywardness and the decadence of the social fabric of Kashmir was the underlying reason for a certain trend of apostasy in the Kashmiri society, as otherwise there has been never any major apostasy from Islam in Kashmir for the past 600 years even in worst conditions. He stressed that the Christian community in are our brothers and Muslims have a religious duty of making them feel secure. He appreciated the Muslim scholars of for showing maturity in handling this issue and not just ignoring it. He advised that Muslims should not react in a negative manner as in today’s globalised world, it can have serious repercussions. He also said that the controversy surrounding certain respected figures of IRRT should be dealt with within the Muslim scholarship and not in the public domain.