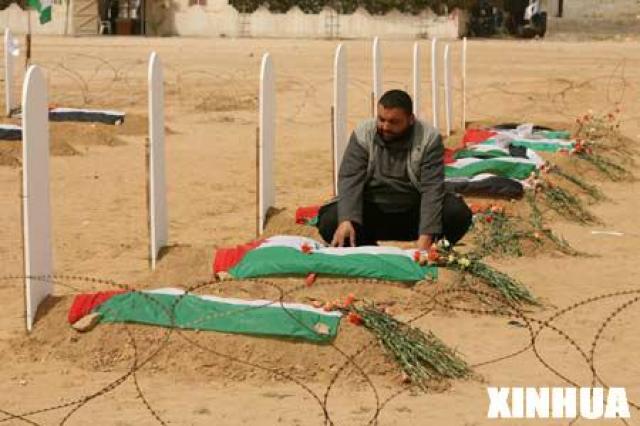 Gaza: The three weeks of Israeli offensive have killed some 1000 Palestinians, half of them are civilians more than 4000 are wounded.

There is not enough space in Gaza to bury the people killed by the Israeli air and ground strikes, just six miles wide and 25 miles long Gaza, has been suffering shortage of burial space as long as the Israeli aggression is in progress.

People are burying their beloved ones in the old graves of their relatives; they are looking for the grandparents, parents, and cousins, to bury the killed ones in the same graves.

A family arrived with their 14 year old son, who was killed in the Israeli air strike, and they were looking for some space and a gravedigger approached them and asked them that if they have any deceased relative, so he could reopen the grave, to bury the young boy.

Israeli warplanes could not make a distinction between the Hamas militants and civilians and according to Red Cross chief, Israel is committing war crimes in Gaza.

UN General assembly condemned the Israeli offensive in Gaza and demanded killing of innocent civilians and the immediate pullout of the Israeli troops from the Palestinian areas.

They all are martyrs and they need to be buried immediately, Omar, 25, told the media.

Three brothers, 5 month old Muhammad, 1 year old Mutasim and 2 year old Ahmed were buried in the grave of their aunt

Israel, like a mad elephant, treading on the children and women of Gaza, ignoring the world calls for an immediate withdrawal of the troops, in the trance of military might, that is being used against the unarmed civilians, who have been coping with Israeli blockade for more some 18 months and now the ground offensive, that has made the life miserable, made the humanity cry over the senseless world community, that has sewn their lips and the mute spectators of the UN, US and European Union are watching the bloodshed, they had planned some six decades back, in shape of an illegitimate Zionist state in the heart of Muslim world.