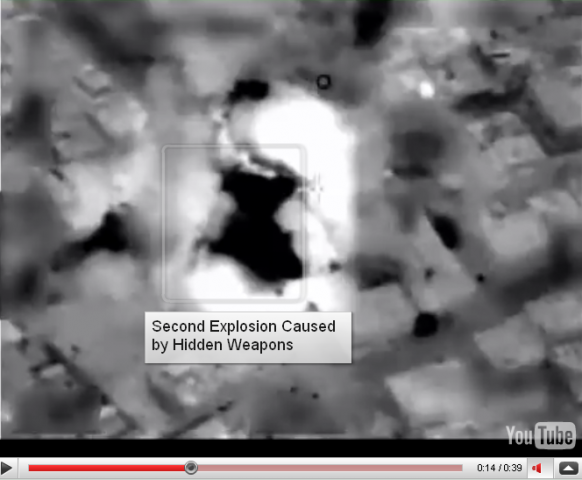 The Israeli Defence Force is bombing Mosques in Gaza that contain rockets, mortars and bombs. Videos released by the IDF show spectacular secondary explosions sending debris high into the sky after the dumps become ignited after the primary impact.

The videos (two in total, first here) were posted by the IDF to Youtube as part of its information war against Hamas, and reposted to popular anti-Jihad webblogs like littlegreenfootballs.com.

The strike is shown in real-time grainy, black and white footage, captured from Unmanned Aeriel Vechicles or mission aircraft (unspecified).

The exact location of the Mosques is not mentioned, and it is not known whether the strikes and huge, billowing explosions shown resulted in any innocent civilian casualties.

Israel says its war on Hamas – of which exploding Mosques filled with bombs is one part – is intended to stop the munition stocks in Gaza otherwise being fired from Gaza at Israeli cities.

According to a recent report from the Intelligence and Information Centre 1730 rockets alone were fired from Gaza at Israeli population centers in 2008.

An idea to the increasing scale of the problem, the number of unexpected munition arrivals in 2008 was more than double the number of visits in 2007 and 2006 (783 and 940 rocket strikes, respectively) .

While Hamas operates freely in Gaza with the political and military support of the Iranian government it is likely they will continue to be able to dispose of unwanted explosive-filled bomb casings on Israeli population centres. This being the case it is unlikely Israel will stop bombing weapon-caches soon, even if, as the videos show, they are in Mosques.