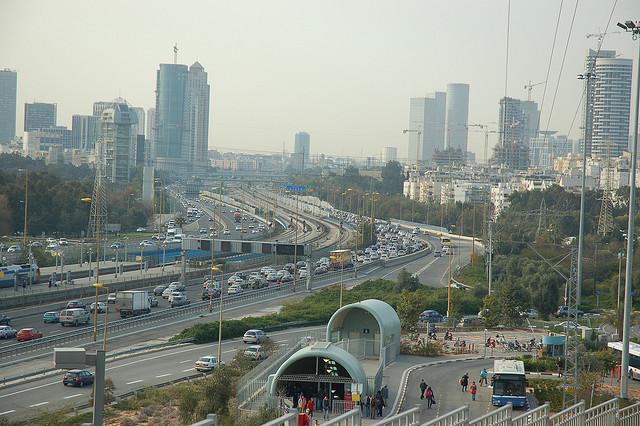 This opinion piece is a response to Dean Walker’s piece, Is Israel a Terrorist State?

I recently encountered the article "Is Israel a Terrorist State?" by Mr. Dean Walker, published by GroundReport, concerning the allegedly humanitarian flotilla for Gaza (the overdue drugs and seven hundred people accompanying them).

I believe it will be futile to challenge his interpretation of the flotilla events as dishonest. Consequently, I propose to follow a different line of argument, based on the axiom that Israel is a state like any other state on the globe, – it has a territory, over which it has the full sovereignty, borders which it has the right to protect, and citizens whom it has the duty to defend.

To begin with, we know well that no war in which Israel had been involved was initiated by Israel; it will be reasonable to conclude therefore that all the wars waged by Israel were defensive. If in the course of these wars Israel had managed to seize control over a part of the enemy territory, this can be aptly described by using the words of a popular Russian song: "We have not invited you, but you barged into." Little doubt, had Israel been defeated and lost part of its territory, the advocates of Justice would not have proposed such a ridiculous solution as coming back to the borders of some (no matter of which exactly) particular year. The advocates of old borders must be consistent: why should not Mexico demand coming back to the borders of 1836 or Germany to the borders of 1939?

The validity of the idea of Israel’s withdrawal from the "territories" is not as self-evident as it seems to all those who have nothing to do with these territories. One observes in this connection that the popular motto "Territories in exchange for peace" conspicuously resembles the scheme of protection racket. There is, however, one significant difference: in exchange for money the racketeers grant one a peacfull existence and even a protection, whereas in the case of Israel the consequences are just the opposite. Having established himself in the West Bank and the Gaza strip, Arafat, the then favorite of the champions of Peace and Justice, increased his terrosist activity, – for from there the Israelis were in easier reach. He initiated a long-term "Intifada," that is, the ongoing murder of the civilians who happened to travel by bus, go for shopping, sit in a caffe, or attend a discotheque; and from the Gaza strip they shell our cities and towns.

I do not cite events and statistic data lest Mr. Walker and others like him habitually declare the statistics an exaggeration and documented events a juggling with facts. Still I wish to draw your attention to one particular event, the terrorist attack on the Tel Aviv Dolphinarium discotheque. For the above reasons I do not describe the details of the murder and do not cite the number of the victims (you can easily get the information elsewhere). And if we recall 2001, we cannot pass over the September 11. One must be a very naïve person not to see the common denominator of the two events. At that time everybody understood that the terrorism must be fought back; some nine years later, not too long a period for human memory, we (I mean not Israel but the rest of the world, including now the USA) feel sympathy for the present-day murderers.

But to return to Israel. Instead of the peace promised by the Oslo agreement, we have got an ongoing terrorist campaign. On the naïve assumption that Israel has the right to defend its citizens, we decided to apply our right to self-defence, – without asking the permission from the Arabs, Europe, or anybody else. In response to the September 11 attack the US army was sent to Afganistan. Israel, for its part, opted for a less drastic measure: we began to construct a fence in order to prevent terrorists from entering our territory and to protect, as far as possible, our residential blocks from the fire of terrorist bands. (You might be interested in the story of the Jerusalem suburb Gilo whose residents for years suffered daily the fire from the neighboring Arab village Beit Jalla; please don’t forget that Gilo is part of Jerusalem, our capital city.) As always, Israel was in the wrong: the construction of the fence stirred up public opinion throughout the world: Israel was accused of apartheid; for some reason, the accusers conveniently forgot the Spanish Melilla and Ceuta fences, the Saudi fence on its border with Yemen, the US fence on its border with Mexico, the Indian Kashmir fence, and some thirty other fences and barriers in different countries, not counting the Great Wall of China. I, for my part, suggest to compare the number of the terrorist attacks on Israel before and after the construction of the fence; this, incidentally, was precisely the purpose for which our government decided to build it.

Unfortunately, the Arabs did not like the idea of the fence, and to appease them our leaders offered them a piece of Israeli land; the problem was that there were Israeli villages on this land. But since the inhabitants of these settlements were Jews and not Arabs, the problem was easily solved: our government expelled these Jews from their homes, demolished their villages, and wished to the Arabs good health in the hope that they will be pacified and channel their energy into building their independent homeland. The Arabs gladly accepted the offering: the shelling of Israeli towns was now more comfortable and effective. This raised the question: perhaps the Arabs are shelling Israel not for no particular reason but in order to kill Jews? And a man who seeks to kill the other man, even if the victim is a Jew, is hardly a good person. (On the other hand, why should one feel sympathy for every single Jew? For if one does, one will be unable to feel sympathy also for every single Arab, and they are very numerous.)

And thus we approach the issue of the blockade of Gaza, which, as the opponents of the existence of Israel assure us, is the root of all evil. I readily agree that blockade is inhumane. But is the daily shelling of our cities humane? And how would other countries respond to shelling? For instance, the USA? To those who do not know the answer I explain: the purpose of the blockade is to prevent, as much as possible, the supply of weapons and war materials to Gaza. Egypt also imposed a blockade. Why? Ask them; probably they have good reasons for doing so, reasons which champions of Peace and Justice do not take into consideration.

The Israeli blockade of Gaza is far from being total: forbidden are only those goods and materials which threaten the security of Israel. There has never been any restrictions on foodstuff and basic goods. Here is a quotation (taken from the Internet) from Adrien Jaulmes’ story in Le Figaro:

The shops in the city of Gaza are full of various goods, trays burst with fruits. In electrical appliances shops you can buy extra-large refrigerators, in telephone boutiques you can purchase the latest models of mobile phones. Computers, playstations, toys, stylish bridal dress, drags, seasonings; nothing indicates any sort of crisis, not to speak of a humanitarian crisis.

The blockade is not everlasting, and – although this may sound surpising to the defenders of Peace and Justice – its duration depends on those who are fond of shelling Israeli cities: as long as they launch the Qassam rockets, the blockade continues; once they stop shelling and live in peace with us, the blockade is left. As simply as that.

And now about the flotilla "peace activists." Why in the quotation marks? Because those who call themselves so are not naïve; they knew well that they were going to trespass the Israeli border.

They consciously decided to commit the offence, and not in order to alleviate the suffering of the hungry. In Israel, as in any other country, there are custom houses where the officers examine goods and decide, according to the custom regulations, if these goods can be brought into the country. In this respect Israel does not differ from other countries. But if a citizen of other country tries to cross the border in a place which is not meant for crossing, he is considered a trespasser. In any country, even the most democratic one, the trespassors are brought to trial.

This is a matter of common knowledge. Your "peace activists" could bring their humanitarian aid legally, through the front door, as in the end they were compelled to do. But their goal was to cause a sensation, and they tried to enter through the window. Quite expectedly, they were met by the border guards whose job, as with their collegues in any other country, is to arrest the trespassers. Is the USA any different in this respect?

I dwell on this topic at length because for some reason some people feel difficulty to understand the causative connection between the events: the publicly declared criminal intent to trespass the border, the disregard of the repeated warnings by the guards, the attack on the guards, and their inevitable response. It would indeed be absurd to suppose that the border guards in any country would shoot unarmed, peaceful, and innocent people. And to think so of the Israeli soldiers, boys raised in Jewish families by Jewish mothers, is to be out of one’s mind.

Thus, one should realize and remember that: