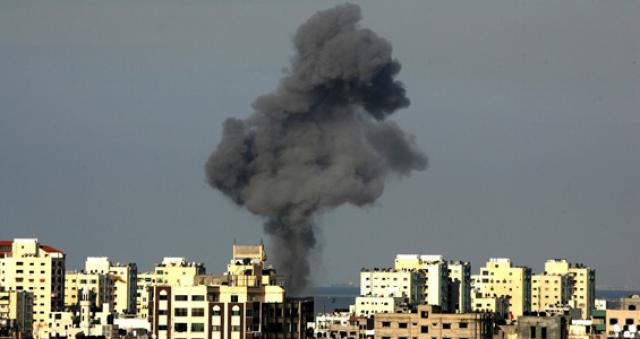 There are two completely different versions of what is currently happening in Gaza.

In the Israeli and North American press, Hamas – ‘Islamic terrorists’ backed by Iran – have in an unprovoked attack fired deadly rockets on innocent Israel with the intent of destroying the Jewish state. North American politicians and the media say Israel "has the right to defend itself".

True enough. No Israeli government can tolerate rockets hitting its towns, even though the casualty totals have been less than the car crash fatalities registered during a single holiday weekend on Israel’s roads.

The firing of the feeble, home-made Al-Qassam rockets by Palestinians is both useless and counter-productive.

It damages their image as an oppressed people and gives right-wing Israeli extremists a perfect reason to launch more attacks on the Arabs and refuse to discuss peace.

Israel’s supporters insist it has the absolute right to drop hundreds of tonnes of bombs on ‘Hamas targets’ inside the 360sq km Gaza Strip to ‘take out the terrorists’.

Civilians suffer, says Israel, because the cowardly Hamas hide among them.


As usual, this cartoon-like version of events omits a great deal of nuance and background. While firing rockets at civilians is a crime so, too, is the Israeli blockade of Gaza, which is an egregious violation of international law and the Geneva Conventions.

According to the UN, most of Gaza’s 1.5 million Palestinian refugees subsist near the edge of hunger. Seventy per cent of Palestinian children in Gaza suffer from severe malnutrition and psychological trauma.

Medical facilities are critically short of doctors, personnel, equipment, and drugs. Gaza has quite literally become a human garbage dump for all the Arabs that Israel does not want.

Gaza is one of the world’s most-densely populated places, a vast outdoor prison camp filled with desperate people. In the past, they threw stones at their Israeli occupiers; now they launch home-made rockets. Call it a prison riot, writ large.


When the so-called truce between Tel Aviv and Hamas expired on December 19, Israeli politicians were in the throes of preparing for the February 10 national elections.

Israeli politics are playing a key role in this crisis.

Israel’s elections are only six weeks away, and Likud was leading until the air raids on Gaza began. Kadima and Labour are now up in the polls.

The heavy attacks on Gaza are also designed to intimidate Israel’s Arab neighbours, and make up for Israel’s humiliating 2006 defeat in Lebanon, which still haunts the country’s politicians and generals.

When the air raids on Gaza began, Barak said: "We have totally changed the rules of the game."

He was right. By blitzing Hamas-run Gaza, Barak presented the incoming US administration with a fait accompli, and neatly checkmated the newest player in the Middle East Great Game – Barack Obama, the US president-elect – before he could even take a seat at the table.The Israeli offensive into Gaza now looks likely to short-circuit any plans Obama might have had to press Israel into withdrawing to its pre-1967 borders and sharing Jerusalem.

This has pleased Israel’s supporters in North America who have been cheering the war in Gaza and have been backing away from their earlier tentative support for a land-for-peace deal.

Israel’s successes in having Western media portray the Gaza offensive as an ‘anti-terrorist operation’ will also diminish hopes of peace talks any time soon.

Obama inherits this mess in a few weeks. During the elections, Obama bowed to the Israel lobby, offering a new US carte blanche to Israel and even accepting Israel’s permanent monopoly of all of Jerusalem.

As he concludes forming his cabinet, his Middle East team looks like it may be top-heavy with friends of Israel’s Labour party.

Obama keeps saying he must remain silent on policy issues until George Bush, the outgoing US president, leaves office, but his staff appear happy to avoid having to make statements about Gaza that would antagonise Israel’s American supporters.

Obama will take office facing a Middle East up in arms over Gaza and the entire Muslim world blaming the US for the carnage in Gaza.

Unless he moves swiftly to distance himself from the policies of the Bush administration, he will soon find himself facing the same problems and anger as the Bush White House.

Israel’s Gaza offensive is also likely to torpedo the current Saudi-sponsored peace plan, which had been backed by all members of the Arab League.

The plan, now likely defunct, had called for Israel to withdraw to its 1967 borders and share Jerusalem in exchange for full recognition and normalised relations with the Muslim world.

Arab governments will now be unable to sell the deal as they face a storm of criticism from their own people over their powerlessness to help the Palestinians of Gaza.

Egypt, in particular, is being widely accused of collaborating with Israel in further sealing off and isolating Gaza. It seems highly unlikely they will be able to advance a peace plan with Israel for now.

This is a bonus for right-wing Israelis, who have always been dead set against any withdrawal and strongly supported the attack on Gaza.

Other Israeli factions who were always lukewarm about the Saudi peace plan are now unlikely to reconsider it.

Israel’s security establishment is committed to preventing the creation of a viable Palestinian state, and refuses to negotiate with Hamas. Unable to kill all of Hamas’ men, Israel is slowly destroying Gaza’s infrastructure around them, as it did to Yasser Arafat’s PLO.

Israel’s hardliners point to Gaza and claim that any Palestinian state on the West Bank would threaten their nation’s security by firing rockets into Israel’s heartland.

Israel is confident that its mighty information machine will allow it to weather the storm of worldwide outrage over its Biblical punishment of Gaza. Who remembers Israel’s flattening of parts of the Palestinian city of Jenin, or the US destruction in Falluja, Iraq, or the Sabra and Shatilla massacres in Beirut?Though the torment of Gaza is seen across the horrified Muslim world as a modern version of the Warsaw Ghetto uprising by Jews against the Nazis during World War Two, Western governments still appear bent on taking no action.

Though Israel’s use of American weapons against Gaza violates the US Arms Export Control and Foreign Assistance Acts, the docile US Congress will remain mute.

Israel’s assault on Gaza was clearly timed for America’s interregnum between administrations and the year-end holidays, a well-used Israeli tactic.

It calls for a non-religious state to be created in Palestine, meaning an end to Zionism. Ironically, Sheikh Ahmed Yassin, the founder and late leader of Hamas, had spoken of a compromise with Tel Aviv shortly before he was assassinated by Israel in 2004.

The Fatah regime on the West Bank installed by the US and Israel after Yasser Arafat’s suspicious death will be further discredited, leaving the militants of Hamas as the sole authentic voice of Palestinian nationalism.

Hamas, the militant but still democratically elected government of Gaza, is even less likely to compromise.

The Muslim world is in a rage. But so what? Stalin liked to say "the dogs bark, and the caravan moves on," and as long as the US gives Israel carte blanche, it can do just about anything it wants.

The tragedy of Palestine will thus continue to poison US relations with the Muslim world.

Those Americans who still do not understand why their nation was attacked on 9/11 need only look to Gaza, for which the US is now being blamed as much as Israel.

Unless Israel can make 5 to 7 million Palestinians disappear, it must find some way to co-exist with them. Israeli leaders on the centre and right continue to avoid facing this fact.

The brutal collective punishment inflicted on Gaza will likely strengthen Hamas and reverse any hopes of a Middle East peace in the coming years.

Filed under: World
Share Tweet Pin G Plus Email
previous article: In the US, Gaza is a different war
next article: World Longest Natural and Stable Beach