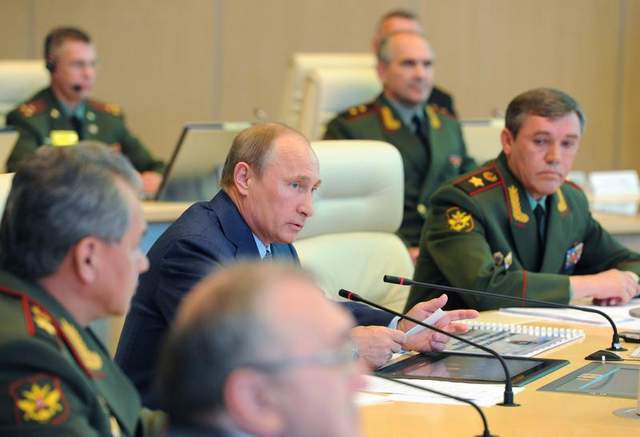 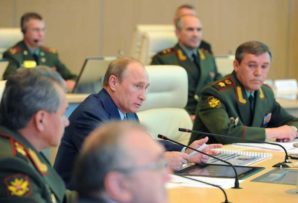 Putin with Russian military commanders ponder the buildup of U.S. naval presence in the Arctic as a serious threat to their national security. Citing the fact that it only takes 15 minutes or less for missiles fired from US subs to strike Moscow.

President Vladimir Putin said on Tuesday Russia had vital defense and economic interests in the Arctic, citing a potential U.S. military threat from submarine-based missiles there.

Needless to say his comments are somewhat disconcerting to say the least.

“There are (U.S.) submarines there and they carry missiles,” the Russian leader said.

Putin may have been referring to nuclear missiles.

“It only takes 15-16 minutes for U.S. missiles to reach Moscow from the Barents Sea. So should we give away the Arctic? We should on the contrary explore it”, said Putin in an article in the Star (source: Russia needs Arctic presence to guard against U.S. threat http://www.thestar.com.my/News/World/2013/12/04/Russia-needs-Arctic-presence-to-guard-against-US-threat–Putin.aspx).

Putin may have been referring to the USS Connecticut which has been spotted in the Arctic region during 2013 (see video: http://www.youtube.com/watch?v=Wd2vq6-C088).

USS Connecticut (SSN-22), is a Seawolf – class submarine – it carries a complement of eight 26-inch torpedo tubes, 40 torpedoes and deadly Tomahawk subsonic cruise missiles capable of traveling in excess of  550 mph (880 km/h). In addition the USS Connecticut carries over 100 mines.

The Tomahawk missile are designed to attack a variety of surface targets.

Although a number of launch platforms have been deployed or envisaged, only sea (both surface ship and submarine) launched variants are currently in service. Tomahawk has a modular design, allowing a wide variety of warhead, guidance, and range capabilities and capable of carrying  nuclear warheads as well as
conventional: 1,000lb (450kg) High explosive or Submunitions dispenser with BLU-97/B Combined Effects Bomb or PBXN.


It should be noted that in 1987, the U.S. Navy possessed more than 3,700 non-strategic nuclear weapons for use by almost 240 nuclear-capable ships and attack submarines in nuclear battles on the high seas. Today the number is zero (source: Department of the Navy memo, dated february 2013  http://www.fas.org/programs/ssp/nukes/nuclearweapons/SECNAVINST8120-1A.pdf).

Apparently Russia didn’t get the memo – and still considers these types of offensive military weapons a serious threat to its national security interests, as evidenced by President Putin’s comments recently.

The comments signal that Russia still views the United States in many ways as the principle threat in this particular region. So much so in fact that Russia has dispatched nuclear warships to the arctic circle to warn US Navy ships to keep out (see video: http://www.youtube.com/watch?v=t7v03zT8z2c).

Filed under: Military, News
Share Tweet Pin G Plus Email
previous article: Collaborative effort to end chronic homelessness in Phoenix could serve as model for the entire nation
next article: Urge for Change Perceptible from Karnah to Kathua : Mehbooba