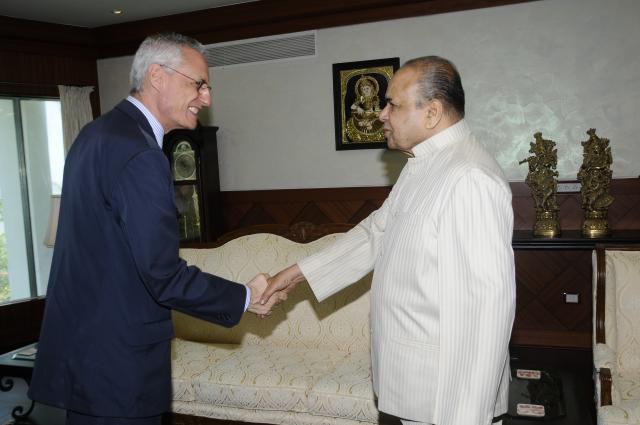 Daniele Mancini, Ambassador of Italy in India, expressed happiness that there is ‘favourable prejudice’ about Italy prevailing in India and showed readiness for cooperation of movie industries of two countries.

Ambassador Mancini on Saturday met Governor of Maharashtra, K. Sankaranarayanan at Raj Bhavan in Mumbai, Maharashtra state.Expressing the need for strengthening cultural relations between Italy and India, Mancini said that he was keen to bridge the gap between Bollywood and Italy’s film city Cinecitta. Mentioning that 40 per cent of Italian business companies in India are located in Maharashtra, Mancini said that there is still large scope for doubling the business with India.

He also said that Indians are increasingly visiting Italy as tourists and also for celebrating weddings in Italy.

He said, “While Italy’s financial institutions are located in Mumbai, the country’s industries are concentrated in Pune.” He told the Governor that Monti, which is one of the largest textile brands in Italy is operating from Kolhapur in Maharashtra and employs 5000 people.

Referring to the incident involving Italian Marines who were arrested for killing fishermen in Kerala, the Ambassador told the Governor that investigation is taking place in the matter and that a special court has been established to hear the case. He said that a number of high level political visits of both countries are scheduled this year. He also informed that a cultural festival of Italy is to be organized in India later during the year.

Welcoming the Ambassador to Maharashtra, the Maharashtra Governor expressed the hope that India will be only happy to enhance cooperation with Italy in all areas including business, tourism, culture and student exchange.