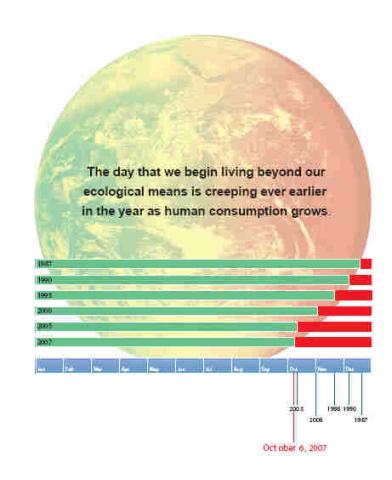 It’s been ten years since the US ecologic economics expert Robert Constanza shocked the world by slapping a monetary value on the earth’s natural resources. Now, a decade later, has the science come of age?

When Constanza estimated air, minerals, water and soil at a combined value of USD33 trillion in 1997, he triggered a few simultaneous reactions; both mainstream economists and environmental specialists doubted that his number was valid, but Constanza had also laid the cornerstone for a numbers based environmental approach.

Ecologists naturally shy away from economics and economists are taught a totally different game in universities, so progress has been slow. Its only in the last two years that ecological economics has made significant inroads.

In established academia; the University of Vermont now offers courses in ecological economics. Plus it´s only been since last year that the first academic textbooks saw the limelight.

By now, ecological economics relies on improved calculations and the number of reliable indicators is growing. They include measurements of the value of natural resources from melting ice to bicycle production. A calculation indicating the annual depletion of the earth’s resources is summed up in a robust mathematical formula: [ world biocapacity, measured in global hectares / world Ecological Footprint, also measured in global hectares ] x 365 = Ecological Debt Day.

Some valuable ideas have been established as to how natural goods, assumed ‘free’ by mainstream economists, can make it into regular economics.

The glossary ofby Ecofoot.net is quite indicative of the level of sophistication that has been reached. For instance, the Ecological Debt Day´s inclusion of the global hectare is explained as

A productivity weighted area used to report both the biocapacity of the earth, and the demand on biocapacity (the Ecological Footprint). The global hectare is normalized to the area-weighted average productivity of biologically productive land and water in a given year. Because different land types have different productivity, a global hectare of, for example, cropland, would occupy a smaller physical area than the much less biologically productive pasture land, as more pasture would be needed to provide the same biocapacity as one hectare of cropland. Because world bioproductivity varies slightly from year to year, the value of a gha may change slightly from year to year.

In short, ecologic economics values resources (or lack/damage thereof) at physical or monetary levels and it subjects human well-being to the well being of the planet.

Mainstream economics fails to provide means to analyze these issues and therefore the ecologists take this from social and natural sciences. This does imply that ecological economics discards the central tenet of mainstream economics; Gross Domestic Product (GDP) as a measure of wealth.

More in-depth information about ecologic economics can be found on the website of the International Society for Ecological Economics (ISEE), an organization headed up by Robert Constanza. Which welcomes readers with a description of its raison d’etre; “Ecological economics exists because a hundred years of disciplinary specialization in scientific inquiry has left us unable to understand or to manage the interactions between the human and environmental components of our world.”

That is a logical continuation from where the neoclassical theorists are camped out. When in 1776, Adam Smith invented free-market economics, the world’s total population was less than 700 million. As opposed to 6 billion and more today. Smith set out his theories, believing that natural resources were infinite, so he simply left them out of the equasion. We know better about the limitations of nature now, but economics generally doesn’t account for this. A related misconception by mainstream economists is that natural capital is interchangeable with human capital (labor and technology). This is contested by ecological economics.

Aside from Constanza, two other prominent proponents of ecological economics were described by Grist magazine in an article which also points out that there is little enthusiasm in official policymaking circles for these people, simply because their teachings are so different from what’s taught in schools and universities.

The prophets include Joshua Farley, a researcher at the Vermont’s Gund Institute for Ecological Economics. A staunch crusader for the new paradigm, Farley prized a doctorate in economics from the clutches of a committee of old-guard economists in 1996. He’s working together with Herman Daly, another figurehead in the ecological economics area. They’ve co-authored a textbook that was published early last year.

Herman Daly is considered the founding father and reigning guru of ecological economics. He’s a former insider at the World Bank who also flipped. Borrowing ideas from John Stuart Mill who propounded the steady-state economy that is inline with ecology, Daly publicly advised his former employer to “stop counting the consumption of natural capital as income; tax labor and income less, and resource extraction more; maximize the productivity of natural capital in the short run and invest in increasing its supply in the long run; and most contentiously, abandon the ideology of global economic integration through free trade, free capital mobility, and export-led growth”, according to a report on Adbusters’ website True Cost Economics.

True Cost Economics targets students to work change, which is pretty much the stage where the discipline as a whole is; an entire generation of new economists needs to be educated formally before their impact on policy can be felt.

In addition, Farley says that he has his students work with a community partner on a real life problem. “If the theory helps them understand the problem they are working on and provide solid solutions, they learn the material better, and have some empirical support for the theory. If instead what they learn from a real life problem contradicts the theory, then they learn the theories are inadequate and must be improved – and it’s their job to improve them. That’s the scientific method.”

Ecological economics specialists that are/have been close to policy making include Lester Brown who heads up the Earth Policy Institute. He´s the author of a book, Plan B, which provides a compelling argument for measuring the value of water at true cost in order to preempt looming crises. In his book, Plan B, he points out that water productivity of especially Third World countries needs to be raised to prevent nations like China from substituting its imports of (irrigation) water by imported grain. This is an issue that generally goes by unspotted by economists, yet that is threatening to have a big impact on the world’s poor, Brown contends. Earth policy maintains twelve economic indicators that measure progress in building an eco-economy, including global world production growth, production of bicycles and the rate at which ice caps are melting around the globe.

Mathis Wackernagel, who’s the co-inventor of the Ecological Debt Day formula, is currently working with the business specialists of the city of London to reduce the city´s footprint. He runs the Global Footprint Network (www.ecofoot.net).

Prominent policy makers include the new head of the United Nations Environment Programme (UNEP) Achim Steiner. When he was installed last year, he said that it is about time we quit thinking about economics and environment as rival teams; “We need to make these two sides of the development coin team players, players on the same side. We then have a chance to achieve the fundamental shift of values and reach a new understanding of what really makes the world go round", Steiner said.

UNEP last week published details of new energy projects worth over $100 million, including a sugar project which will reach an estimated 10 million sugar farmers in Ethiopia, Kenya, Malawi, Sudan, Swaziland, Uganda and Tanzania. It is a reproduction from a Mauritius project, which provides as much as 40% of that country’s electricity needs.

Direct European legislators? Hard to find. The agenda of the European Commission lists among 2008 priorities a sustainable Europe. It’s being discussed this week, along with topics including putting citizens first and making sure Europe at large also comes first as a world partner. That might leave some leeway for ecological thinking, but you’d expect clearer goals from a Portuguese-presided EU that’s supposedly committed to biodiversity.

Got any good ideas for nominations of ecological economics specialists? Submit your nomination at ISEE before January 2008. Winner of the First Nicholas Georgescu-Roegen Prize earns US $25,000.