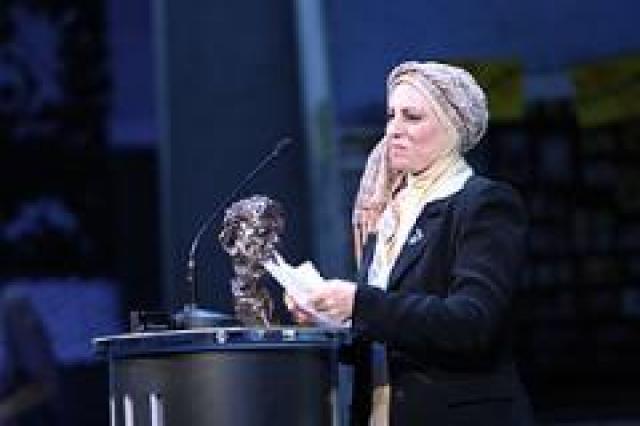 For Zainab Ahmed, it was a rare chance to step into the spotlight.

“This is the first time I have stood on stage as a journalist,” she said in front of 1200 guests who had come to the Schauspielhaus in Hamburg on May 9 for the Henri-Nannen prize award ceremony, the most prestigious journalism award in Germany. “Iraqi journalism has almost become a secret profession. Usually, we Iraqi reporters avoid publicity because too much publicity can cost you your life.”

Ahmed was chosen to receive the Press Freedom award category on behalf of the Institute for War and Peace Reporting’s Iraqi journalists.

In a country that has been named repeatedly the most dangerous place for journalists in the world, Ahmed, trained by IWPR in Sulaimaniyah in northern Iraq, was selected to represent the organisation because of her steadfastness and commitment to press freedom.

She has worked throughout the conflict, even during the peak of the sectarian violence and the attacks and intimidation campaigns against Iraqi journalists and media workers.

Regarded as the German equivalent of the Pulitzer Prize, the Henri Nannen awards are the highest national honour for print journalism.

Each year, Europe’s biggest magazine publisher Gruner and Jahr and its German weekly news magazine Stern pay tribute to high-quality journalism in German speaking magazines and newspapers. The Press Freedom award is given to an individual for outstanding commitment to the values of a free press.

The panel of judges consisted of the editors-in-chief of the most influential German print media (including Spiegel, Focus, Die Zeit, Frankfurter Allgemeine Zeitung and Sueddeutsche Zeitung) as well as Elisabeth Biondi, Visuals Editor of the New Yorker and the internationally acclaimed photographers Martin Schoeller (New York) and Thomas Hoepker (New York).

Previous recipients of the Press Freedom award include the Turkish journalist Hrant Dink, assassinated in January 2007, and the internationally acclaimed Russian newspaper Nowaja Gaseta, which has been persistently and courageously fighting for an independent press and the freedom of speech in Russia.

Ahmed`s stories and those of the other IWPR-trained Iraqi journalists have become a valuable source for foreign media outlets, international organisations and policy-makers after the number of foreign journalists in Iraq declined due to the severe security risks. Thus the award not only honours Ahmed´s personal commitment but also that of her reporter colleagues and the entire IWPR Iraq team.

“Of course I thought many times about leaving the country, as so many others [did],” said Ahmed in her acceptance speech in which she also paid tribute to her late colleague Sahar al-Haideri who was killed in June 2007 by gunmen in Mosul.

Ahmed, like her colleagues, was always aware of the risks the work involved. “But I decided to stay because I want to tell people what is going on in Iraq,” she said.

Working with IWPR and attending its training sessions had helped her “discover a completely new world – the world of journalism and the opportunity to reach an international audience with my voice”.

The award ceremony was the glamorous finale of a week-long trip that brought eight Iraqi journalists, four of them trained by IWPR, to Germany in May. Invited by the German foreign ministry and the German embassy in Baghdad, the journalists visited Berlin and Hamburg to get familiar with the German parliamentary and federal system. The tightly-packed agenda included meetings with members of parliament, journalists, political analysts, archeologists and policy-makers.

In Hamburg, the journalists spent time at the editorial offices of Stern, which has cooperated with IWPR-trained journalists on several occasions. At the renowned Henri-Nannen School of Journalism in Hamburg, the Iraqi reporters met young German journalists for a discussion on journalism ethics and the future of the media.

For the German students, the visit was a rare opportunity to meet Iraqis face-to-face and get a first-hand insight into the most recent developments in Baghdad.

“How can you cope with the fear and just keep on reporting?” one of the German journalism students wanted to know.

“We don´t have a choice,” replied on of the Iraqi reporters. “Of course we are scared. But you just go out and do your work. And every morning you hope that you will come back safely in the evening.”

Susanne Fischer managed IWPR’s Iraq programme over the last three years. She accompanied the Iraqi journalists in Germany and is now managing the IWPR Syria programme.