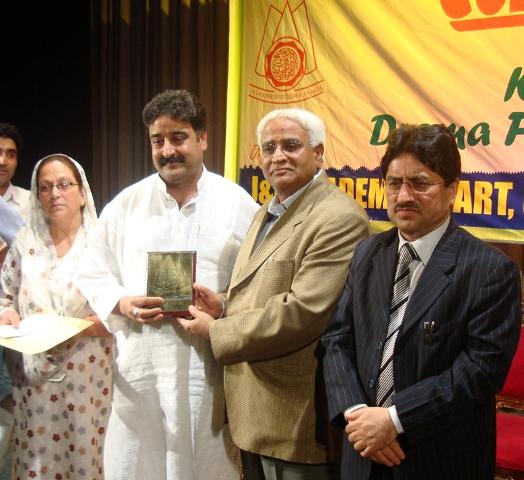 Vijay Bakya in his address stated  that Kashmir has remained a hub of theatre and performing arts activities  since centuries. He added that  The “Bhand Pather”, “Bach Nagma”, “Hafiz Nagma “and other forms of performing arts needs urgent documentation and dissemination from Government side so that this richest traditions could be preserved and propagated properly . He congratulated the artists who were been  awarded during the ceremony  and hoped that their  outstanding contributions will continuous in coming days also.

.Zaffar Iqbal Manhas in his address stated that from this year we are going to revive the Annual Drama Festival pigment in each and every district of the State which will go a long way in promoting theatre and performing art in the State of Jammu and Kashmir. He said the Academy is providing Annual Financial Assistance in favour of 150 Theatre and Performing Arts groups in the State while as, this year  we have recommended about 100 groups for grant of Financial Assistance from Department of Culture Govt. of India so that the dying forms of Theatre and Performing Arts could be revived and preserved for all generations to come.

Each Award carries Cash Prize, a Shawl, Certificate and a citation.

Filed under: Media & Tech, World
Share Tweet Pin G Plus Email
previous article: A Tale of Two Ports: Seeking to recast their brand in an unprecedented economic crisis
next article: Yahoo might do a deal with Microsoft for "boatloads" of money