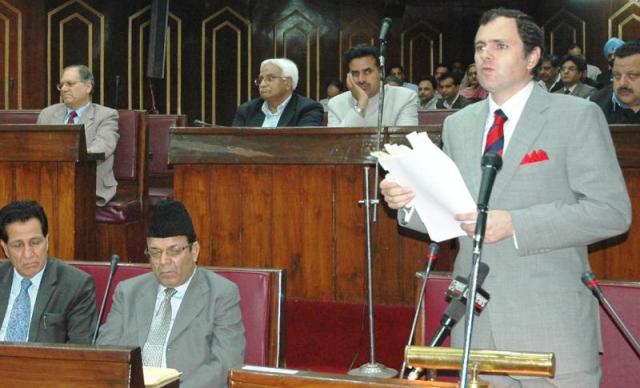 Replying the discussion on Motion of Thanks to Governor address for addressing the joint Legislative Session, Mr. Omar said when Indo-Pak dialogue process was on, many confidence building measures like opening of Uri-Muzaffarabad and Poonch-Rawalakot roads came into being and the percentage of infiltration came down considerably having good effects on the peace and development of Jammu and Kashmir.

Quoting the Prime Minister, Dr. Manmohan Singh’s statement “India will move extra mile if Pakistan acts against terrorism”, Mr. Omar said that we appreciate and salute the Prime Minister for this peace loving gesture which indicates the intention of India to improve the relations with Pakistan. “ has itself promised that it would not allow its territory to be used against , as such, it has to fulfill its commitment and stick to its word”, he said adding that his Government will continue to play its role as a facilitator of dialogue between and and the Centre and the State.

On quite dialogue between the Centre and the Seperatists leaders, the Chief Minister said that it is better that the dialogue is quite and out of the media reach so that some concrete proposal emerges to be shared with the public.

On rehabilitation policy for return of youth from across the border, Mr. Omar said that it should not be mistaken with the surrender policy. “The rehabilitation is for those who have not indulged in militancy and are not coming with the gun. They have not taken the gun, as such, surrender does not apply”, he said adding that the surrender policy already exists in the State under which many militants have surrendered and joined the mainstream. “Some of them have also been recruited by the BSF and CRPF in their ranks”.

Criticizing the false propaganda of PDP against the Coalition Government, Chief Minister, told Legislative Council that the International Human Rights Watch (IHRW) has appreciated for the first time his Government’s track record of human rights protection. “Without raising slogans of healing touch like PDP and delivering nothing on ground, my Government stood strong for human rights and took prompt action against the HR violators”, he maintained.

Omar questioned PDP leadership’s promise of healing touch when four innocent children playing cricket were fired upon at Handwara and an Imam and his son were killed by the forces during Mufti regime. “Raising slogans is easy and taking action is courageous”, he said asserting that making noise is their (PDP) trait and performing on ground is our character.

Referring to the Nishat incident in which BSF personnel allegedly killed a young boy, the Chief Minister said that it is for the first time in last 20 to 21 years that BSF itself handed over the accused to the State police for action under law. “We have created a strong foundation of human rights protection and are further strengthening it”, he said stating that the International Agency of Human Rights Watch has hailed the State Government’s action and approach in this regard.

Mr. Omar said that a section of vested interests is trying to disturb the peace and law and order situation in the State. “Who they are, where form they receive money and why they do this will be made public at an appropriate time”, he said, adding that the handful stone pelters will not be allowed to take one crore population of its hostage.

“Government has received good response from the elders and mohalla committees presidents from the Srinagar downtown areas under five police stations and from the areas of old Baramulla and Sopore police stations regarding the release of youth, apprehended for stone pelting, provided the elders certify that they will not indulge in this menace in future. The elders have established contacts with the concerned police stations and I reiterate my words stated in the Lower House in this regard”, he added.

Ridiculing PDP’s double standards regarding the killing of innocents, the Chief Minister said that this party did not even spoke a word in the House against the killing of an eleven days infant by the stone pelters. “When the opposition speaks for stone pelters why they are shy of saying something against the killers of Irfan, the eleven days old infant”, he questioned the PDP and said that four persons have been arrested for this crime and they will get the punishment as per law.

On financial mess created by the PDP during its tenure, Mr. Omar said that the party created Rs.2004 crore liabilities for my Government and there is no record of the spending of funds received under different sectors from the Centre. “I am not in a position to find out where Rs.690 crores received under PMRP, Rs.379 crore under Natural Calamity Relief Fund and about Rs.400 crores unspent balance of centrally sponsored schemes have been spent”, he said.

Highlighting various aspects of Sher-i-Kashmir Employment and Welfare Programme for Youth (SKEWPY), Mr. Omar said that for the first time a holistic policy has been formulated to address the Employment concerns. “It is unfortunate that the opposition has started saying that the policy has failed which will in fact commence from 1st of April this year. How can a policy be judged to have failed when it has not been physically launched”, he said adding in a lighter vein that the batsman has not even taken his crease on the pitch and you are declaring him out.

Referring to the return of Kashmiri Pandits to the Valley, Mr. Omar said that his Government is making sincere efforts for their dignified return to the valley. “Besides creating 3000 jobs for Kashmiri Pandit youth transit residential complexes have been constructed in the Valley”, he said maintaining that 15000 KP youth have already applied for these jobs.

On measures to curb corruption and making administration transparent, the Chief Minister said that the Right to Information Act is the efficient tool to address this menace. “Besides monitoring at the three levels by the State officers, the Government has in consultation with the Central Government engaged International Monitoring Agency, Mackenzy and Co. and National Monitoring Agency Nabcom to monitor Rs.500 crore Power Transmission Project and Rs.150 crore other projects respectively”, he said adding that the Government intends to convert Vigilance Organization into Vigilance Commission to strengthen it to deal with the cases relating to the government employees while as State Accountability Commission will deal with the cases of elected representatives.

“A Committee comprising Chief Minister, Deputy Chief Minister and Leader of single largest Opposition party in the Legislative Assembly will meet to find out the Chief Information Commissioner and two Commissioners” he said adding that Mr. Wajahat Habibullah has not been relieved by the Centre to head the Commission under RTI.

Mr. Omar said that the Government has flagged 2010 as the election year for local bodies and panchayats to empower the people at grass roots for taking decisions on development front and expending funds accordingly.

Stating that the NC-Congress coalition partners are working in close coordination and tandem to carry forward the agenda of peace and prosperity in the State, the Chief Minister disclosed that the coming local bodies and panchayat elections will be fought by the two parties jointly. “Present coalition is the best coalition we have seen so far”, he said adding that there has never been any walkouts by the Cabinet Members from the Cabinet meetings during the last over one year of his Government, unlike the routine in the erstwhile coalition in which PDP was the partner.