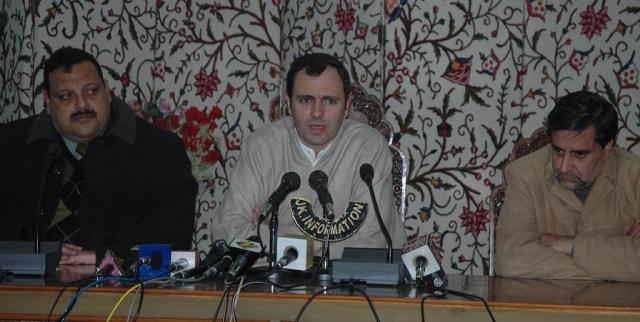 The Chief Minister, Mr. Omar Abdullah today said that he would like to package as a destination for industrial investment and would like to address infrastructural constraints in the sector to bring it on the radar of Indian Inc.

Mr. Abdullah said that till the infrastructural constraints for large-scale industry are addressed, the Government will focus on development of Small and Medium Enterprises and request the Central government to help in skill development of our youth.

Elaborating further on the issue of skill development, the Chief Minister said that he would like to discuss the issue with industrial organizations like FICCI, CII, ASSOCHAM and NASSCOM and hoped that they would be receptive to sort out the issue.

Mr. Abdullah said that he will be travelling to Mumbai tomorrow, where he has been invited by Business India as a chief guest to confer Businessman of the Year Award. "I would be meeting the cream of the industry and would talk to them on this issue so that J&K features again on their radar", Mr. Abdullah said. "I will interact with the leading industrialists to motivate them to invest in the State and undertake skill up-gradation of local entrepreneurs", the Chief Minister added.

Referring to Cross-LoC trade, Mr. Abdullah said, "It is a part of Confidence Building Measures but has not derived encouraging results as communication and financial facilities have not been made available for the purpose". He said after Mumbai attacks, the relations between and have taken a dip and hoped that these would improve soon.

Answering a volley of questions during the press conference, the Chief Minister said that Government would initiate all possible measures to mitigate the sufferings of people, which are projected by the electronic as well as the print media. He said the Government has already chalked out a 100-day programme for various departments so that the fruits of schemes in various sectors of development reach people within the short possible time.

The Chief Minister said the State has excellent infrastructure on ground but lacked the staff to make them fully functional. He said that the Government will work to make these assets functional.

Referring to the power scenario in the State, the Chief Minister said that power transmission losses in the range of 60 per cent were unacceptable, adding that making more power available to the people will be the priority of his Government. He also stated that Union Minister, Mr. Jairam Ramesh would be coming to soon and he will be taking up these issues with him.

Replying to a question about power shortage in the valley during winter months, Mr. Abdullah said he had instructed Power Development Department authorities to store new transformers so that these are installed in place of damaged ones within the shortest possible time. He said the mechanism to repair the damaged transformers is also being speeded up for the benefit of the consumers. He urged the media to apprise the consumers about the ill–effects of hooking and misuse of power. He said this would go a long way in preserving transformers from damage and would also help minimize the load shedding.

The Chief Minister announced that a press club and a residential press colony would be established after the site for the same is identified by a core group of media persons. He said the press club would, apart from holding of press meets and similar functions, also serve as a venue for social interactions.

Describing the Fourth Estate as a vibrant force to keep the Government on the right track, the Chief Minister said the media has to play a vital role in highlighting the problems of the people, as also suggesting measures to redress these.

Mr. Abdullah said that the present coalition Government belongs to all the regions and faiths and decisions would be taken to lessen the people’s problems without any discrimination.

In reply to a question, the Chief Minister said that systematic changes are underway to root out corruption which has eaten into the vitals of the society and said, "Actions speak louder than words".  He said efforts are on to introduce and implement e-governance in the State in a big way which he said would go a long way in arresting this menace.

Replying another question, the Chief Minister said that he is in favour of reviving the District-Level Screening Committees so that these cases are settled at the district-level.

Regarding Islamic University, the Chief Minister said the financial position of the University is not satisfactory but measures to make it viable and vibrant would be taken soon.