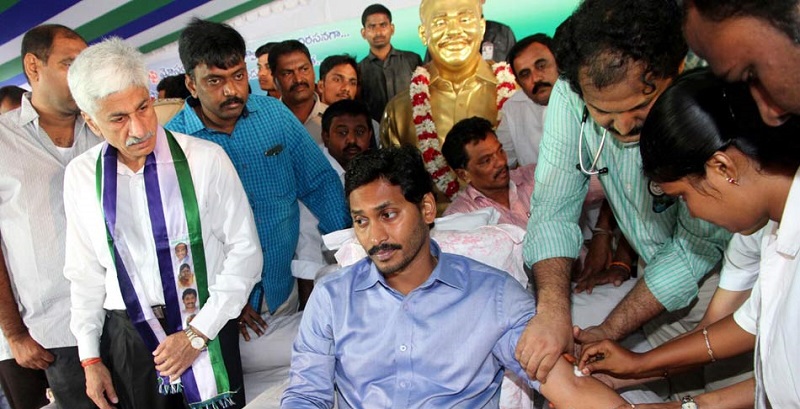 Guntur (GR-TYP-BIN): YSRCP Chief Mr. YS Jaganmohan Reddy’s indefinite fast in support of Special Status for Andhra Pradesh entered the fifth day on October 11, even as his health remains deteriorated. A team of government doctors visited Jagan at the hunger strike camp at Nallapadu village in the district at around 11 AM today for his health checkup.

The leader’s mother Mrs. YS Vijayamma and his wife Mrs. YS Bharathi also arrived at the camp to lend support. Briefing on Jagan’s health, doctors said he was getting weak day by day and has lost 2 kgs in the last five days. His pulse rate has also come down, doctors said, adding that they also carried out blood and other tests at the spot.

Meanwhile, YSRCP leader Mr. Botsa Satyanarayana said party workers are worried about Jagan’s health but their leader is firm on his stand to continue with the hunger strike. He said the ‘Special Status’ is like sanjeevani (medicine) which will offer a new lease of life to AP. The former minister also expressed confidence that Prime Minister Narendra Modi might announce Special Status for the state on visit for the foundation stone-laying ceremony of the new capital city, Amaravathi, on October 22.