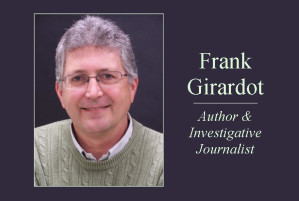 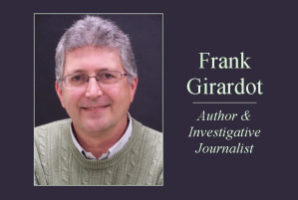 (1888 PressRelease) Frank C. Girardot Jr.’s popular book, “Name Dropper: Investigating the Clark Rockefeller Mystery,” has been updated in ebook form to include exclusive, jailhouse interviews with Rockefeller himself. Girardot’s story sheds light on the grisly evidence that led to Rockefeller’s arrest and conviction for the 1985 murder of San Marino, CA resident John Sohus.

Los Angeles-Long Beach, CA – In the aftermath of con man/murderer Clark Rockefeller’s trial and conviction (the German immigrant was sentenced to 27 years to life for the murder of San Marino resident John Sohus), Star Creek Entertainment releases the ebook version of Frank C. Girardot Jr.’s gripping true crime story, “Name Dropper: Investigating the Clark Rockefeller Mystery” ($9.99). It has been updated to include excerpts of jailhouse interviews that Girardot conducted with Rockefeller after his conviction in August, 2013.

“‘Name Dropper’ could alternatively be titled ‘Jaw Dropper’,” said Norris, best known for his role as DEA agent Hank Schrader in AMC’s “Breaking Bad.” “It’s not only an intriguing look at the almost unbelievable and bizarre life of Christian Karl Gerhartsreiter (aka Clark Rockefeller), but it also is a tautly written whodunit spanning several decades, thousands of miles and linking Chris to a grisly murder left unsolved for 28 years.”

Novelist and New York Times’ literary critic Walter Kirn, author of “Blood Will Out,” a memoir of his friendship with Rockefeller, also offered praise for Girardot’s book.

“Girardot’s book will become a reference point for anyone interested in this bizarre, mysterious crime and the unfathomably peculiar criminal who committed it.”

Girardot, an award-winning journalist, is senior editor for the Los Angeles News Group, which includes the Pasadena Star-News, San Gabriel Valley Tribune and Whittier Daily News. In 2008, the Detroit native led the Star-News’ investigation that is likely at least partly responsible for the L.A. County District Attorney’s Office’s decision to file murder charges against Rockefeller.

“Name Dropper” reveals chilling details about the evidence – most of it circumstantial — that led to Rockefeller’s arrest for allegedly killing Sohus.

“I got interested in this story because of John (Sohus),” said Girardot. “Long before anyone knew about Clark Rockefeller, what remained of John’s skull was kept in a brown paper bag in a basement laboratory at the L.A. County Department of Coroner. It was stapled together and passed around as a teaching tool, so I was told. So when Rockefeller turns up and he’s linked to this mystery I knew something about, how could I not write a book?”

According to L.A. County prosecutors, Rockefeller is actually Christian Karl Gerhartsreiter, a German national who came to the United States on a student visa in the late 1970s and never left. He conned society’s elite from San Marino to Beacon Hill for more than 25 years, changing his name and his life multiple times along the way.

In 2007, Rockefeller was arrested — and subsequently convicted — in the kidnapping of his daughter in Boston. At the time he also was a person of interest in the disappearance of Sohus and his wife Linda, whose whereabouts remain unknown.

“I’ve come to the conclusion we will never know what became of Linda Sohus,” said Girardot, who grew up in Saratoga, CA. “Everyone who comes into contact with the story will take away something different about her fate. We will never know, unless in some Perry Mason-esque moment, she throws open the doors of the courtroom and waltzes in at the eleventh hour. I don’t think that will happen but it could. The story is that bizarre.”

Along with appearing as an expert commentator on the Rockefeller case on “Dateline NBC” and Greta Van Susteren’s “On the Record” on Fox, Girardot writes a bi-weekly Crimescene column that is followed by readers around the globe.