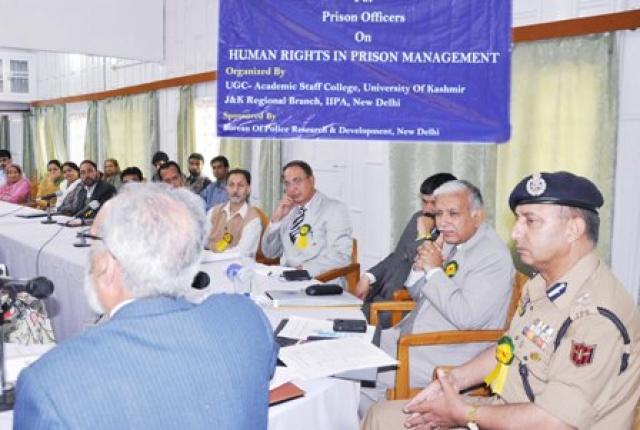 Srinagar, India,April 15 (Scoop News) – Inspector General Police, Kashmir Zone ,  Farooq Ahmad today delved in depth on the condition of prisons and prisoners both in the local context as well as the global scenario. "I feel that the jails, like other institutions should be put under civilian control" he added.

IGP Farooq Ahmad was addressing in a 3 day training program for prison officers on the topic "Human Rights and Prison Management" which was organized by the of the University in collaboration with the regional branch of the IIPA, at the University today.

On the occasion, Farooq Ahmad also laid stress on the need to develop programs that would help the prisoners lead respectable lives when they return to their society after their sentence.

While delivering the inaugural address, Vice-Chairman – IIPA, J&K Regional Branch,  A M Watali discussed the need to incorporate a legal basis to reform the prisoners. "Words like rigorous imprisonment should be removed from the jail statutes as they do not go well with the idea of treating the prisoners in accordance with human rights" he said. He further gave suggested that voluntary organizations should come forward to help prisoners by organizing medical camps, computer literacy training programs and other such positive steps.

While welcoming the guests and participants, senior faculty of the department of Law and the program coordinator, Prof. S M Afzal Qadri stressed on the need to organize such programs as they were more relevant in today’s times when human rights was an important consideration in the judiciary. "The prisons have now been replaced by the notion of being correctional institutions and as such, the prison officers need to be informed about how to reform prisoners" he said.

The 3 day training program is designed to sensitize the jail officials about the necessity to uphold human rights in jails while taking care of security at the same time. This program is the first one of two similar training programs for the prison officials. The second program will be held from the 119th to the 21st of April 2010. Both the workshops are sponsored by the Bureau of Police Research & Development New Delhi.