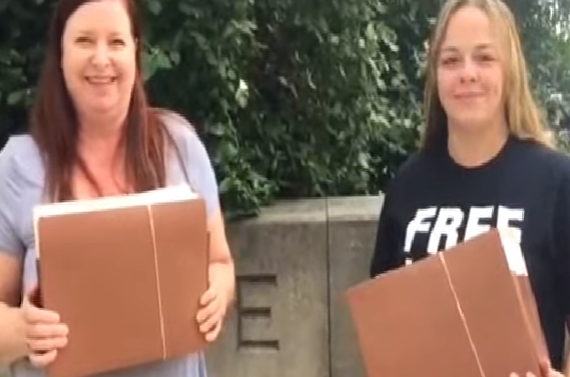 On August 4, 2016, a Change.org petition containing over 62,000 signatures was delivered to the McLean County State’s Attorney’s office asking for DNA testing in the Jamie Snow case. Jamie’s daughter Jessica Snow and Tam Alex from the Committee to Free Jamie Snow (CFJS), hand delivered the petition to the clerks for McLean County State’s Attorney Jason Chambers, who happened to be on vacation at the time of delivery.

Jamie Snow was wrongfully convicted in 2001, of a 1991 “cold case” murder and armed robbery of a gas station attendant in Bloomington, Illinois. Jamie is an innocent man who remains in prison while DNA evidence goes untested in his case, even though not one shred of physical evidence has ever linked Jamie to the crime.

For nearly 8 years the McLean County State’s Attorney’s office has fought DNA testing in this case, despite the fact that the University of Chicago’s Exoneration Project has agreed to pay for ALL DNA testing at NO COST to McLean County tax payers. The petition simply asks Jason Chambers to allow the Exoneration Project to pay for the DNA testing. There is absolutely no logical reason for Mr. Chambers to continue blocking the tests. There is no doubt that if this crime had occurred today, that the state would test every single piece of physical evidence collected from the crime scene.

Jason Chambers has made no public comments regarding the recent petition delivery, but he did make it known that he was following the petition’s progress back in March, when he decided take to Facebook to discuss the petition’s contents. Unfortunately, the Facebook comments made by Mr. Chambers were not only filled with misinformation, they also violated the Illinois Rules of Professional Conduct.

Mr. Chamber’s Facebook comments were posted shortly after the petition was launched. The petition has gathered thousands of signatures since that time. Jamie’s supporters are now hopeful that over 62,000 voices will help Mr. Chambers see the error of his ways, and allow the DNA to be tested in Jamie’s case.

Jamie is incredibly grateful for the support he receives, and was eager to record a message of thanks to all who have taken and interest in his petition.

Jamie’s defense is in full swing. As many know, the wheels of justice turn very slowly. Jamie’s fight will continue on for as long as it takes to correct his wrongful conviction. A federal appellate court is set to rule on Jamie’s habeas corpus petition on September 19. Jamie is seeking a reversal of his conviction or an evidentiary hearing in federal court. There is also a motion requesting DNA testing which is currently pending. Jamie has a very strong case for innocence. The current evidence in his case is overwhelmingly in his favor. Testing the DNA will only further work to prove his innocence. The State is obligated to seek the truth. There is absolutely no reason for any further delay.

Jamie’s petition was launched by Injustice Anywhere in conjunction with The Committee to Free Jamie Snow. Both organizations are truly thankful for the continued support.

Filed under: Crime, News
Share Tweet Pin G Plus Email
previous article: Key Aspects You Must Consider in Your Next Luxury Sedan
next article: Usefulness of Legal Services by Personal Injury Attorney