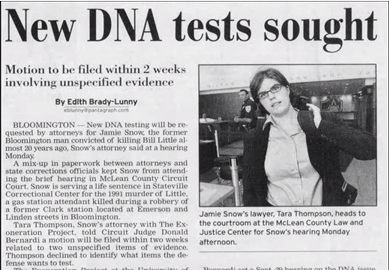 As I have previously reported, a petition was recently launched asking McLean County State’s Attorney Jason Chambers to allow DNA testing in the Jamie Snow case, in Illinois. The petition, which was launched by Injustice Anywhere on Change.org, has people asking the simple question: “Why not test the DNA?”

Jason Chambers, has now shown that he is well aware of those questioning his decisions on the Snow case, by taking to Facebook to state his position. On March 12, a McLean County citizen (who happens to be Facebook friends with Jason Chambers) signed and shared the Change.org petition for Snow. Chambers decided to respond – not to the petition’s organizers – but to his friend’s public post on Facebook.

The Facebook posts by Chambers have led to an online debate about Snow’s case. Snow has responded to some of the comments posted in that discussion. Whether you support him, or are against him, Snow’s well reasoned response is well worth a listen.