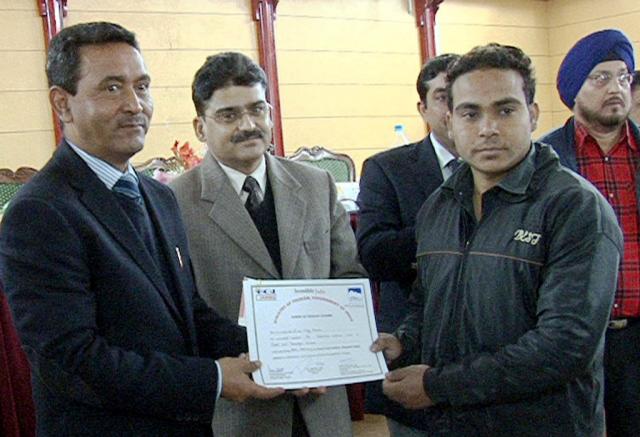 Jammu, January 18 (Scoop News) –   Asserting that skill development in Tourism and Hospitality sector is getting focused attention of the government, the Minister for Tourism and Culture  Nawang Rigzin Jora today said that Jammu Food Craft Institute (FCI) would soon have its own campus with provision for full-fledged degree and diploma courses in the trade.

Speaking at a function organized by FCI, Jammu to give away the certificates to pass out batches,  Jora said the government has already sanctioned Rs. 10 crore for construction of FCI campus. He said that the work on project would be started once the state cabinet gives its nod for the use of   land identified for the purpose at Sidhra near Golf Course.

He said the main objective of offering skill development training in hospitality sector is to capitalize on the vast tourism potential in the state. He called upon youth to avail the facility and opt for professional courses having potential of employment in tourism sector.

The Minister said that Srinagar has a full-flagged Institute of Hotel Management (IHMs), while in Leh the work on FCI complex involving over Rs. 5 crore would be completed this year.

Jora said that no region of the state would be neglected in promotion of tourism. “Government is keen to upgrade tourist related infrastructure at all potential spots of the state which not only facilitate tourists but also help to boost the economy of the locals”, he said and added that state has received a large number of tourists this season and the trend wil continue in future as well. He said about one crore pilgrims visited Mata Vaishno Devi last year among which 13 lakh also visited Shiv Khouri temple and over 4 lakh visited Patnitop, while over ten thousand reached to Bhaderwah- which is fast emerging as a major attraction for the tourists in Jammu region . He said tourism potential of Rajouri-Poonch is also being   explored, adding that the motor rally being organized on Mughal road would be made an early event to attract the tourists to the magnificent locations of   these twin districts.

Listing the initiatives taken by the government for promotion of tourism in Jammu, the Minister said that under 13TH FC, the Centre has sanctioned Rs. 50 crore for restoration and preservation of Mubarak Mandi heritage complex. He said at present the restoration works on the heritage palace is being carried out on peace meals and once the Centre releases the funds under 13th FC, it would be taken up at a bigger scale.

He said cable car project from Mubarak Mandi to Bahu Fort would   also be taken up soon, adding that the project was delayed as the government  revised the earlier plan and decided to go for a state of art type cable car .  He said for this the government engaged reputed RITES consultancy to prepare a revised plan after a comprehensive survey. The Minister said the Sidhra Golf Course Phase-I has been completed, while the laying of Phase-II 9 hole   course would be completed by April this year.

Commissioner Secretary, Tourism and Culture,  Atal Dullo, who is also the Chairman of FCI, Jammu in his speech highlighted the aims and objectives of Hunar-Se-Rozgar programme .He said the growth of tourism depends upon two things one infrastructure building and another trained staff. He said state government is endeavoring to provide skill development trainings to the youth under Tourism and Hospitality sector which guarantee ample job opportunities. He said under this programme so far 2800 youth of the state have been imparted with different trainings under the sector of which, 60% trained youth got   employment in hotel industry and 40%   have started their own ventures. He said this year over 2000 youth would be   trained for different services of hospitality sector at three institutions of the state.  He said the government is also paying focused attention to upgrade tourist related infrastructure at potential spots of the state.

Director Tourism, Jammu,  R. S. Mehta and Principal IHM, Srinagar also spoke on the occasion and threw light on the objectives of HSR.

Earlier, Principal FCI, Jammu,  Joti Bhatti in his welcome address highlighted the activities of the institution. He said FCI Jammu is conducting short term courses for skill development of the youth under HSR. He said so far 300 youth have been trained in the fields of waiters-cum-housemen and cooks in the institution, adding that this year the FCI has the target to impart such trainings to 250 youth.

Filed under: Media & Tech, World
Share Tweet Pin G Plus Email
previous article: Next fiscal to bring toughest ever economic challenges in the country: Rather
next article: Houses damaged due to heavy Snowfall in Kashmir valley