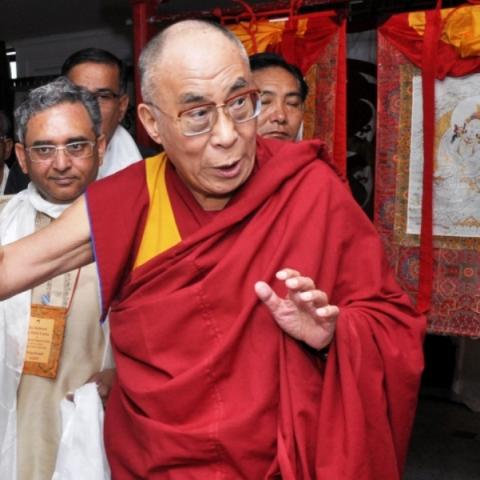 A meeting of the Hoteliers association was held in today under the chairmanship of its President Inderjeet Khajuria. He observed that the visit of the great spiritual leader Dalai Lama to Ambaran will boost the pilgrimage and tourism to this site along with adjoining historical places in the area, thus providing impetus to tourism in region.

The association also hailed the pains taken and keen interest taken by the duo Sharma brothers, member Parliament from Jammu Madan Lal Sharma and J&K Cabinet Minister Sham Lal Sharma in popularising ancient Buddhist site of Ambaran and other heritage spots like Jio Pota, where Gulab Singh was coroneted as Raja of Jammu by Maharaja of Punjab Ranjit Singh.

They have also popularised historical Akhnoor fort, Majestic Chenab river, Gurudwara Tapo Asthan and Bhagwan ParshuRam Temple, by inviting and motivating the father and son duo, the noted, Tibet expert and journalist Vijay Kranti and his photographer son Akshat Kranti to organize a photo exhibition at Ashoka Hotel, New Delhi on these heritage and historical sites in Jammu. It was on the motivation of Madan Lal Sharma and Sham Lal Sharma, belonging to Akhnoor tehsil that the father and son duo spent a lot of time in Akhnoor to take the photographs of recently discovered stupa and relics at Ambaran and other historical places in the vicinity.

The association also hailed and thanked Vijay Kranti and his son Akshat Kranti for taking all the pains in taking the photographs and then exhibiting the same in .

The hoteliers association has appealed to the State Government, the Tourism Minister in particular as well as all the stake holders in promotion of tourism in to take keen interest and make their best contributions in making the visits of Dalai Lama to Akhnoor a grand success. This will be a path breaking event for promoting Buddhist heritage site as well as other heritage spots in the area, Khajuria observed.