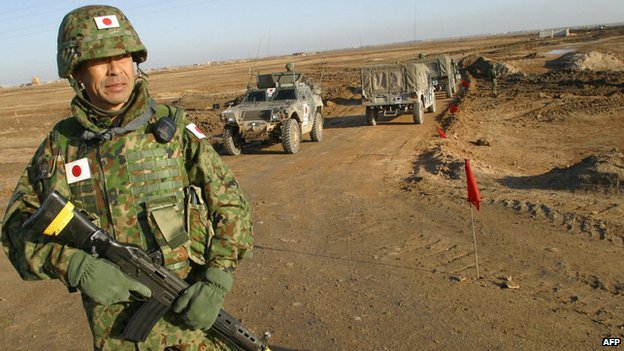 On October 8, 2014 the Department of Defense published its “Interm Security Agreement” between the United States and Japan.

This agreement outlines the various revisions of the US-Japan Defense Cooperation Agreement as agreed to at the “2+2” U.S.-Japan Security Consultative Committee (SCC) meeting in Tokyo on October 3, 2013, including Japan’s right of self defense against armed attacks from other countries. Japan’s military will also now be able to assist allies under attack, in certain circumstances…

The revision of the Guidelines fully accords with both countries’ strategic goals and interests, and will benefit the region and beyond. For the United States, the Guidelines revision aligns with the U.S. whole-of-government rebalance to the Asia-Pacific region. For Japan, the Guidelines revision corresponds to its efforts for the defense of its territory and people and the policy of “Proactive Contribution to Peace” based on the principle of international cooperation. The cabinet decision by the Government of Japan on July 1, 2014, for developing seamless security legislation, envisions the expansion of the Self-Defense Forces activities consistent with the Constitution of Japan.

Looking to the future, the revised Guidelines will update the general framework and policy direction for the roles and missions of the two countries, as well as ways of cooperation and coordination.

In case of an armed attack against Japan, Japan will have primary responsibility to repel the attack. The United States will provide support, including strike operations as appropriate.

Among specific areas of cooperation the United States armed forces and the Self-Defense Forces will work to ensure the resiliency of relevant space assets and their networks and systems, while contributing to whole-of-government efforts to secure the safe and stable use of space and cyberspace including improving the cybersecurity of critical infrastructure upon which they depend to accomplish their missions.

The revised Guidelines also detail cooperation between the two governments in situations involving an armed attack against Japan, and in case of an armed attack against a country that is in close relationship with Japan where Japan’s use of force is permitted under its Constitution and in accordance with the Cabinet decision by the Government of Japan on July 1, 2014.

Many consider the move a dangerous step towards Japan’s ability, under national law  to wage war against China (or anyone else for that matter). This is generating a mixed reaction at home and abroad, especially in the countries that suffered from brutal Japanese colonialism in the first half of the 20th century, such as China which was absolutely ravaged by the tiny island nation of Japan during WWII.

Remember it took two drops of atomic weapons on Nagasaki and Hiroshima to force Japan’s surrender in WWII. More than 140,000-240,000 people died as a direct result of these two bombings.

To give you a sense of the fanaticism and dedication of Japanese soldiers during WWII is Hiroo Onona.  For 29 years, Onona survived on food gathered from the jungle or stolen from local farmers. After losing his comrades to various circumstances, Onoda was eventually persuaded to come out of hiding in 1974, only after his former commanding officer traveled to Lubang to see him and tell him he was “ordered to surrender.”