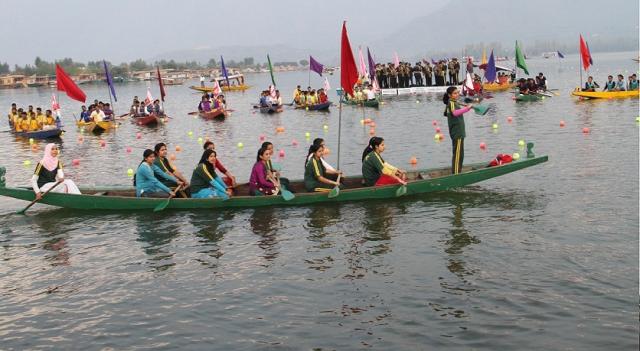 , October 17(Scoop News) –   Jashan-e-Dal, a water sports festival, being organized by Police in the world famous , was declared open at a colourful function held at under Zaberwan hills this evening. Various water sports including Open Kashmir Marathon Shikara Race would be part of the festival.

Declaring open 3-day long festival, the Additional Director General of Police (ADGP),  K. Rajenda Kumar said that the activity is being held under Civic Action Programme with the aim to cultivate talent among the youth in various disciplines of water sports. He said that JK Youth have vast scope to excel in water sports as the State is having enough water bodies which could help in carrying out such activities. He said that the Organisation carried out such activities in the past and the activities would continue in future also.

The ADGP said that JKP, besides its professional duties has been focussing on the physical, mental development of State youth and various programmes are held to give a  right direction to their energies. Youth are our future and the organisation deems it a social responsibility to guide them in choosing their career, said the ADGP.

Rajendra disclosed that various sports events would be played during the 3-day long Jeshan including water polo, kayak & canoe, swimming, shikara race, dragon boat race, demb boat race and open marathon shikara race. He said that various water sports persons and bodies are participating in the festival. The festival would conclude on 19th October, 2012, he added.

.          Earlier, the Inspector General of Police (IGP), Armed Kashmir,  Rouf-ul-Hassan, who is also Organizing Secretary for the event threw light on the 3-day long schedule of events being played in the festival. He said that the performance of the participants would be adjudged by a designated jury and cash prizes would be given away among the participants excelling best.